The city of Detroit has a rich architectural history that serves as a tribute to its important and influential role in early 20th century business and industry, along with modern structures that mark the city’s revival. This tour is best explored as a combination walking/driving tour, and many of the buildings offer guided tours (check each building for specific tour information).

Once again, you can find each of these buildings with more information and photos in MAF’s book, ‘Great Architecture of Michigan’; each entry below contains the book’s corresponding page number.

Ready for the tour?  Let’s go! 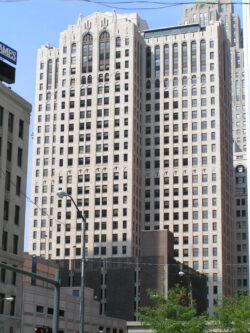 When you stroll through the lobby of the Buhl Building, you can almost imagine Wirt Rowland, the talented designer for Smith, Hinchman & Grylis (SH&G, now SmithGroup), struggling to shape a modern skyscraper out of classical clay.  Among other innovations in his design for the Buhl, he left off the traditional cornice to achieve a more vertical silhouette; and the cross-plan with four wings emerging from a central core was a new way to bring light and air to the interior of a tall building.  Within a few short years, Rowland would add the Penobscot and the Guardian buildings to his portfolio.  Those masterpieces may not have been possible had Rowland not taken his first tentative steps here at the Buhl.

Cass Tech has long boasted elite status among Detroit public schools, with a roster of grads that includes award-winning actresses Lily Tomlin and Ellen Burstyn and a bevy of police chiefs, mayors, artist, musicians, and sports figures.  When the time came to replace its aging, Gothic inspired building, the school boldly stepped into the 21st century with this sleek, efficient, and bracingly modern new home.  Natural daylight spills in throughout the meeting, and the multistory library and media center provides panoramic vistas of the city. 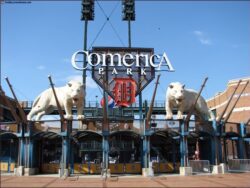 This replacement for the beloved Tiger Stadium at Michigan and Trumbull had a tough act to follow.  But the new stadium works; views are flawless from all over the ballpark, and the downtown Detroit skyline looms impressively over the outfield fences.  Designers added a distinctly Detroit entertainment flavor to the notion of updated historic ballpark architecture.  Ball-eating tigers and giant baseball bat sculptures decorate the exterior, and everything from the enormous scoreboard to the amusement-park riders proclaim this a playground for both young and old alike.

Like no other building in Detroit, this slim shaft of orange-tan brick captured the ideas of architect Eliel Saarinen’s famed entry in the Chicago Tribune Tower competition.  Mostly lacking in historical ornament, the David Stott demonstrated that a skyscraper drew its power from its elemental massing and dramatic verticals.  After this and other towers taking form with clean sharp lines in the 1920s, most architects stopped over-decorating their skyscraper exteriors.

Nearly 40 years after he designed the Grand Hotel on Mackinac Island, architect George Mason crafted this fine blend of Neo-Gothic imagery and a tall, modern building.  The public is most familiar with the main theater, a large venue for music, drama, civic celebrations, and numerous other events.  Tucked away upstairs are a number of smaller but equally distinguished rooms for the Masonic rites.  The entire structure is believed to be the largest Masonic temple in the world and, in our opinion, possibly the most beautiful.

Good things come in delightfully small packages.  This lively little gathering spot gives a human touch to Detroit’s theater-stadium district, and remains the city’s best-known example of the streamlined Art Moderne style.  The enamel steel panels and rounded corners look as fresh today as when it was first built.  Originally at Elizabeth and Woodward (hence the “El” and “Wood” of its name), the building was moved in the late 90s to make way for the new Tigers and Lions stadiums.  Today it stands just outside the entrance to both, draws huge crowds on game days, and remains of the Detroit’s great architectural “saves.”

Unlike the concrete bowl stadiums built in suburban cornfields, Ford Field tucks itself neatly into its urban setting downtown.  The profile is lower than expected, as the architects recessed the playing field and many of the 65,000 seats below grade.  Perhaps most intriguingly, the stadium incorporates the former historic Hudson’s retail department store warehouse along its southern edge, offering room for luxury suites overlooking the field and rental office space.  A focal point of activity during Lions games and special events, Ford Field solves several design problems at once, including how to be a massive modern stadium yet contribute to a downtown revival at the same time. 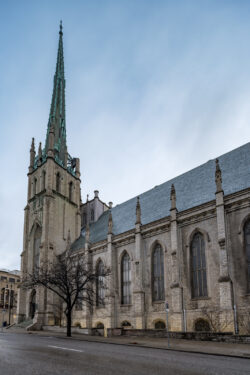 Church spires dominated the skyline of the pre-Civil War Detroit, and Fort Street Presbyterian survives from that period.  A single glance reminds us of the pride and ambition, both civic and religious, of that bygone day.  The style is rather copiously applied Gothic Revival, with a myriad of details that include the almost impossibly slender spire, a small octagonal turret was modeled after a chapel at Cambridge University in England.  The church suffered major damage in fires in 1876 and 1914 but was rebuilt both times virtually to the original plan.  It stands today as a downtown landmark and a vibrant center of faith. The legendary Fox is perhaps Detroit’s most exotic architectural setting.  Like other great movie palaces of the 1920’s, it gave generations of Detroiters a fairy-tale setting in which to find entertainment, drama, or merely an escape from reality for a couple of hours.  This opulent mélange of Egyptian, Hindu, Persian, Chinese and Indian motifs was lovingly restored in the late 1980s when the Ilitch family purchased it.  Since then, the Fox has anchored downtown’s revival and served as the cornerstone of the city’s theater and stadium district. (read the article in MAF’s website, featured in MAF’s Dec. 2021 newsletter).

By any measure, the Guardian Building dazzles.  Wirt Rowland of SH&G, fresh from his triumph at the nearby Penobscot Building, ventured into new terrain with this Art Deco masterpiece, blending fine brickwork, glazed tile, terra cotta, and even painted fabric to achieve new combinations of form, texture, and color.  The multiple mosaics and Pewabic tiles, the huge vaulted main banking floor, and the lively murals in the Guardian’s lobby attest to the ebullience of the 1920s and Rowland’s vision.  Restored by SH&G’s successor firm SmithGroup, which makes its Detroit office in the buidling, the Guardian remains a Michigan treasure (read the story on the building on the MAF website, as featured in our October 2022 MAF newsletter).

The Guardian Building, an on-foot building tour. — Detroit History ToursWhat to do in detroit

The great Minuro Yamasaki softened the International Style design by draping a delicate vertical grillwork around this 32-story skyscraper.  An elegant 30-foot-high glass lobby added further refinement, as did the outdoor reflecting pool with a sculpture by Giacomo Manzu.  The overall effect is one of lightness and grace.  Many see this as a smaller version of Yamasaki’s World Trade Center built later in New York City.  Most agree he achieved considerably more artistic success in Detroit with the idea than he did in NYC. 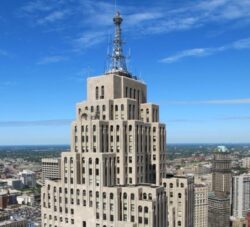 With its tapering setbacks and its dramatic height, this 47-story skyscraper arose during Detroit’s architecturally golden 1920s and remained the city’s tallest building until the Renaissance Center opens a half-century later.  Crafted by the famous Wirt Rowland of SH&G, the Penobscot marked a dramatic shift in tall-building design in Detroit.  After this, no longer could classical wedding-cake ornament define a skyscraper; slender massing and vertical reach dominated from here on.  Today, nighttime lighting of the building’s upper floors creates an added visual impact.

This Beaux-Arts classicism building has hosted so many different businesses over the years that it deserves some sort of a prize.  It began as a bank – the only building in Detroit (other than a mausoleum) designed by Stanford White and his partners.  Much later it became part of an office supply chain, then a clothing store, and still later a training school for computer workers.  It even got tricked out as a temporary nightclub during Super Bowl XL.  Through it all, the elegance of the original design continued to shine through.  A little-known fact is that McKim, Mead, and White created only the front half of the building; in 1914 a sympathetic addition by Donaldson and Meier extended it down to Congress. 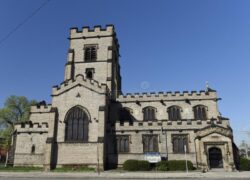 People who built Gothic-Revival churches in America in the 19th century tended to trowel on the Gothic details in a fashion not historically accurate.  Newspaper publisher James E. Scripps wanted to reverse this tendency toward fanciful gingerbread edifices.  Paying out of his own pocket for an Episcopal church near his Detroit name, he engaged an English architect to study authentic models in Britain first, then had Mason and Rice work from his copious notes and drawings.  The resulting style is a reflection of English Gothic from the late 14th century.  Even the tracery in the windows is archeologically correct. 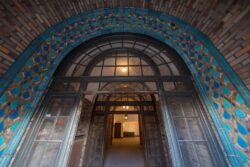 The architect William B. Stratton was a devoted supporter of the Arts and Crafts movement, but late in his career he moved toward a modernist aesthetic.  Here, he gave the Women’s City Club an unadorned facade and slightly abstract massing.  Yet his belief in handcrafted excellence shows in the superb brickwork and in the extensive use throughout the building of Pewabic tiles, produced by his wife, Mary Chase Perry Stratton.  The building was notable for social reasons, too:  In the 1920s, Detroit’s many women’s organizations commissioned Stratton to design a meeting place for them, and in its heyday, the City Club eventually enrolled over 8,000 Detroit women in its classes and extensive recreation programs.