The Fox Theatre in Detroit Michigan opened in 1928 as a premier movie palace, constructed by film pioneer William Fox as part of his nationwide chain of movie houses.  Fox’s Detroit location was unique among the other Fox Theatres as the chain’s largest, and the first venue worldwide to feature built-in equipment for talking pictures, utilizing “Movietone”, the Fox Film Corporation’s patented sound-on-film system that allowed the cinema to show sound films.

Fox was designed by architect Charles Howard Crane, a Detroiter who designed 250 theaters, many of those in the Detroit area. A 1928 Detroit Free Press article stated, “Detroit’s Fox Theatre has the largest clear span balcony in the world. The stage proper is larger than the Roxy Theater in New York and has the largest and finest projection room and equipment of any theater in the world.” 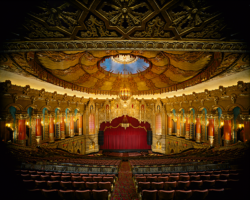 The 10-story building has a steel and reinforced concrete frame and terra cotta details on the exterior.  The building’s exterior, while impressive in scale, is modest in comparison to the opulence found inside.  The interior features an amalgam of Egyptian, Indian, and Oriental motifs. The six-story 3,600 square foot lobby of the theatre features a grand staircase flanked by statuary of enormous reclining lions. The oval-shaped 5,048 seat main auditorium is surrounded by cusped, Islamic-inspired arches that conceal over 2,700 pipes for the original pipe organ.  A colonnade of colossal Corinthian columns extends into the balcony. Decorative gilded plaster elephants, griffins, dragons, pagodas, deities, serpents, eagles, and Hindu goddesses cover the base of the columns and virtually every inch of wall space. A two-thousand-pound 13-foot diameter chandelier with twelve hundred pieces of glass hangs from a large tent-like dome suspended in the center of the auditorium ceiling.

In addition to the main auditorium, the Fox Theatre features foyers, lobbies, stage facilities, eight dressing rooms, a broadcasting booth, a screening room, an infirmary, and a music library. In its heyday the Fox employed a staff of over 400 doormen, ushers, designers, and matrons and routinely posted earnings of $75,000 weekly with an admission rate of 35 cents.

The Fox continued to operate as a movie house throughout the midcentury, eventually falling into disrepair until it was purchased in 1987 by Olympia Entertainment, owned by Mike and Marion Ilitch.  In 1988 the building was fully restored to its former glory at a cost of $12 million. The Fox Theatre Building was added to the National Register of Historic Places in 1985 and named a National Historic Landmark in 1989.  Today, the Fox holds the distinction of being the largest continually operating theater in the country.