Cathedral of Design:
The Guardian Building

It was the mid-1920s and Wirt Rowland, architect with Detroit’s Smith, Hinchman and Grylls, now SmithGroup, was seeking to create a uniquely American skyscraper. The client, the Union Trust Company, gave him almost full control over the design and implementation of what is now known as the Guardian Building.

The building, referred to as the Cathedral of Finance, was completed in 1929 (along with the Fisher Building and the Penobscot Building). October of that year saw the crash of the American stock market triggering the Great Depression.

The design of the Guardian Building referred the Vertical style of architecture, making the human-made structure appear to be hewn out of limestone hills. Rowland drew his design inspiration for the form, color, and materials for the building from his travels to the American Southwest, including Arizona Spider Rock in the Canyon de Chelly, and to Spain, specifically Alcazar Palace in Seville, which influenced his use of rich colored tiles. The ceiling patterns are drawn from Navajo patterns also seen in the southwest.

Roland utilized Dynamic Symmetry to create the patterns used to design everything throughout the building, from the archways down to the door handles.

The building’s north tower is much like the apse of a church.  The unique orange and other colors are seen in the American southwest, and the Pewabic tile was Roland’s interpretation of the tile he saw in Spain. 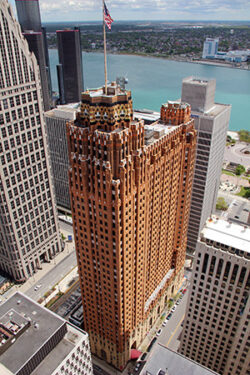 Working with the engineers of SH&G, they were able to design the lobby with no columns that support 26 floors above it. The use of Monel metal, a new material just being developed, was used for the elevator doors and other metal fabrications in the building.

Roland also was able to work with the best artists in Detroit including Ezra Winter for the mural in the lobby, and Carrado Parducci for the bas relief sculptures at the building entrance.

The Guardian Building, referred to as the Cathedral of Finance, is really a cathedral of design that continues to make a lasting impact on the City of Detroit, the State of Michigan, the United States. and the world. (download the brochure from the 90th-anniversary celebration of the Guardian Building). 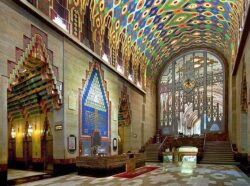