Fall is the perfect time for a road trip – especially if it’s an architecture road trip! For our September voyage, we are travelling through southeast Michigan, making stops in Macomb and Oakland Counties. From structures designed by icons Frank Lloyd Wright and father and son architects Eliel and Eero Saarinen, to awe-inspiring houses of worship, buildings that played an important role in Michigan (and the nation’s) architectural and cultural history, and more, this road trip has something for every architecture fan.

As with every MAF trip, each of the structures can be found on the pages of MAF’s book Great Architecture of Michigan (corresponding book page numbers are noted with each entry).

Buckle up – let’s hit the road! 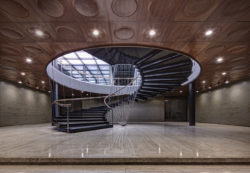 This monumental collection of buildings proved to be more than a home for General Motors’ design and engineering labs when they opened in 1956.  Under the inspired hand of Eero Saarinen, this campus complex of buildings marked an astounding leap into the future of architecture.  Please see the “Must See Michigan Architecture” article on the General Motors Technical Center in this same newsletter.

The Andrus House ranks among Michigan’s finest surviving examples of a mid-19th century American octagon (or eight-sided) house.  The most dramatic feature is the circular staircase that rises up through the middle of the house.  Loren Andrus had the house built in 1860 by his brother-in-law, who designed and constructed the house.

After a half century of varied uses, starting in 1930, the house was purchased by a non-profit group known as the Friends of the Octagon House, who restored and still operates the house today as a museum and educational center. 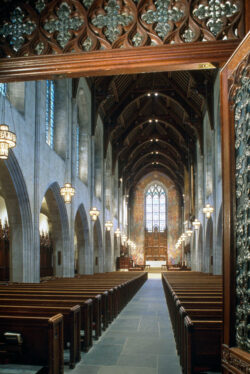 Newspaper publisher George Booth, already hard at work developing his Cranbrook school, decided that a church was needed nearby for neighboring families.  Booth lavished the same care on this Episcopal structure that he did on his other projects, where he utilized numerous crafts masters to contribute to the design.  The church, designed by New York architect Bertram G. Goodhue, was completed in 1928.  Perhaps more than anywhere else in Michigan, the church and nearby Cranbrook show the importance of the patron, and not just the architect in creating beautiful buildings. 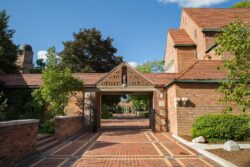 It’s not just the individual building, many designed by the great Eliel Saarinen, that make Cranbrook so memorable.  It’s the whole package—buildings, gardens, fountains, outdoor sculpture and landscape design–that have earned Cranbrook its international fame.  Many architects contributed, but pride of place must go to newspaper publisher George Booth, one of Detroit’s great art patrons, who bought the once-rolling farmland early in the 20th century and spent the rest of his life building and shaping it.

History of Cranbrook | Cranbrook Center for Collections and Research 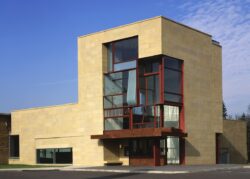 Built in 1938, the Cranbrook Institute of Science is the most visited of Cranbrook’s buildings.  The institute is really two structures in one, the original by Eliel Saarinen and a larger wing designed by Stephen Holl in the 1990’s.  Saarinen showed a transitional style here, an essay in horizontal lines and flat roofs that is about halfway between his richly detailed Kingswood School of a few years earlier and the even more pared-down modernish of his later Museum and Library.

Holl’s addition, modestly tucked away behind the original building, is more about handling big crowds.  Don’t miss the 42-foot tall “light laboratory” in which different colored and shaped pieces of glass reflect sunlight in ever-changing ways.

A Unique Educational Institution About | Cranbrook Institute of Science Toward the end of his long association with Cranbrook, Finnish architect Eliel Saarinen pared down his multi-layered style to an almost abstract modernism.  The resulting composition of the 1942 Cranbrook Art Museum and Library, more than any other, defines not only Cranbrook but also the zenith of Michigan architecture for many people.  Almost always photographed with either the Triton Pool or the Orpheus fountain in the foreground, the Museum and Library vista remains the incomparable Cranbrook photo shot and an inspiration to generations of visitors. 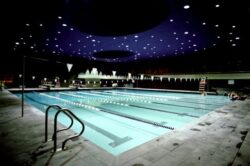 New development at Cranbrook slowed for almost 50 years after Saarinen’s Museum and Library.  Then in the 1990’s, a burst of creativity saw five major new buildings built, of which the Natatorium ranks as perhaps the best.  Created by the husband-wife team of Tod Williams (a Cranbrook graduate) and Billie Tsien, the pair crafted an exquisite interior that features a pair of cylinder-like openings in the ceiling and vertical baffles along the walls that can be opened and closed as needed.  The random pinpoint lighting pattern on the ceiling mimics a night sky.  The pool surface flanks a curtain wall that offers views of the surrounding landscape.  Both functionally and visually, this building is outstanding.

Built in the early 1920’s, the Cranbrook School was Eliel Saarinen’s first building in America.  It is modeled after a medieval college with classrooms, dormitories and a dining hall grouped around a multilevel courtyard.

Early on in his career, one can see the synthesis that marked Saarinen’s greatest work: an adherence not to any one style, but a creative blending of medieval motifs, Scandinavia folk styles, and an Arts & Crafts sensibility.  This was the first building to set the tone for Cranbrook’s lasting fame. 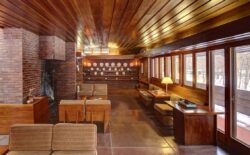 Built in 1941, this house came relatively late in Wright’s long career, when the master was already in his 70s.  By then Wright was designing with an ease and assurance that are remarkable even today.  The home is L-shaped in plan and is arranged so that the bedroom wing fits at a right angle to the living room.  The most prominent feature is a deck thrust into nature, reminiscent of Wright’s masterpiece Fallingwater.  The home was donated to Lawrence Technological University who have become worthy caretakers.  It is probably Wright’s best-known home in Michigan. 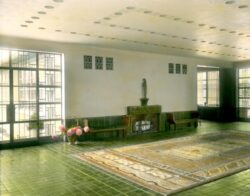 Kingswood, Cranbrook’s school for girls, nestles along the edge of a small lake with a wooded hillside as the backdrop.  Built in 1931, this is one of Saarinen’s most evocative designs featuring a copper roof, overhanging eaves, and strikingly original Art Deco motifs.  The school illustrates the full genius of the Saarinen family.  Eliel designed the building, his wife, Loja, the rugs, drapes, and fabrics, daughter Pipsan some of the interiors, and son Eero, who one day would loom largely over American architecture, crafted the furniture.

KINGSWOOD SCHOOL FOR GIRLS | Cranbrook Center for Collections and Research 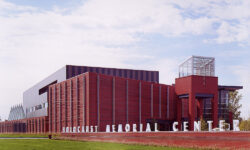 Designed by Ken Neumann of Neumann and Smith & Associates and completed in 2003, the building contains symbolism that was never meant to be comfortable.  Barbed-wire cable wreaths, a symbolic guard tower and vertical stripes on the building façade all stir uneasy memories of places like Auschwitz, where Nazis murdered millions of Jews.  The interior tells an even more powerful story.  After a reminder of pre-World War II life in a Jewish village in Europe, visitors wind down ramps and hallways deeper into the darkness of Nazi horrors.  Architect Ken Neumann said he left the historical wounds as raw as possible, as a cry for tolerance and as a stark reminder of past crimes against humanity.

About Us – Holocaust Memorial Center (holocaustcenter.org) 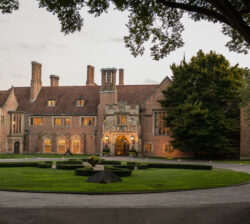 Designed by Smith, Hinchman & Grylls for Matilda Dodge, widow of auto pioneer John Dodge and her second husband, Alfred Wilson.  The couple honeymooned in Great Britain and visited the ancient manor houses of England and became so enamored with the buildings that they decided to build a similar style home when they got back to America.

The resulting house in the then-rural landscape of Oakland County was completed in 1929 and contains 110-rooms in an 88,000-square-foot Tudor Revival style mansion with some of the finest wood carvings, brickwork, interior decoration, and gardens anywhere.  The Hall is now owned by Oakland University where it is used as a conference center.  It stands as one of America’s castles, a beautifully preserved example of the use to which great wealth was once put. 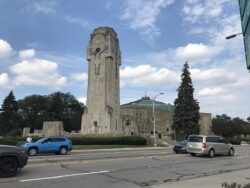 Politically as well as architecturally notable, this Roman Catholic church enjoys landmark visibility at one of the busiest intersections in Oakland County.  Designed by Henry J. McGill, the tower came first in 1931 followed by the much larger church in 1936.  The elaborate Art Deco styling of the limestone tower features a monumental relief of Christ crucified.  The eight-sided church with a central altar holds seating for 3,000 beneath a tent-like roof of copper and nickel-chrome steel.  In the 1930’s, the church’s long-time pastor, Rev. Charles Coughlin, broadcast controversial politicized radio sermons from the site before his bishop silenced him.

I Love Detroit Michigan | National Shrine of the Little Flower | Perhaps no house of worship in Michigan enjoys so dramatic a setting as Congregation Shaarey Zedek.  Set on a bluff overlooking the juncture of Northwestern Highway, I-696 and the Lodge Freeway, it beckons to the many thousands of daily commuters.  Shaarey Zedek’s dramatically upthrust sanctuary has been likened to a monument Hebrew tent or tabernacle or, more abstractly, to the human spirit reaching heavenward.  Completed in 1962, the church was designed by Percival Goodman in association with Albert Kahn Associates. 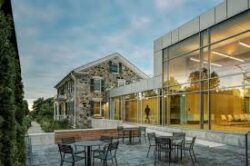 The classic Michigan farmstead with its Greek Revival house came first, built when today’s bustling Big Beaver corridor was nothing more than gentle farmland.  The property was eventually purchased by the non-profit Kresge Foundation to be used as office space.  In 2006, Valerio Dewalt Train Associates, Inc. designed a stunningly modern yet entirely sympathetic addition that integrated seamlessly with the original buildings.  Kresge Foundation, a leader in encouraging “green” design, employed dozens of environmentally sensitive initiatives in its new building.