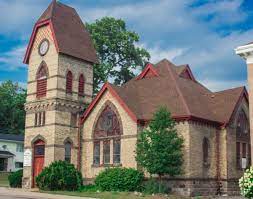 This picturesque Gothic church in Ionia is a delightful example of High Victorian style.  Varied-colored bricks used in a checkerboard pattern decorate the theatrical cap of the tower on the corner of the building.  The church, designed and built by Orry Waterbury, has been a visual landmark in the Ionia community for 138 years.  Waterbury spent his career designing all manner of buildings in the surrounding community. 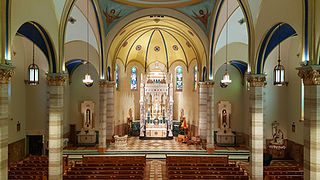 Completed in 1913, this beautiful building stands as a magnificent example of Romanesque-stye church architecture.  The church was designed in 1907 by Henry J. Harks, an architect from Cleveland, Ohio.  The building is a landmark in the Grand Rapids area, giving the impression of the old cathedrals of Europe.  Note the copper-covered dome over the crossing of the nave and transepts and the twin front spires topped with domed cupolas which flank the impressive triple-arched entrance and the circular stained-glass window. 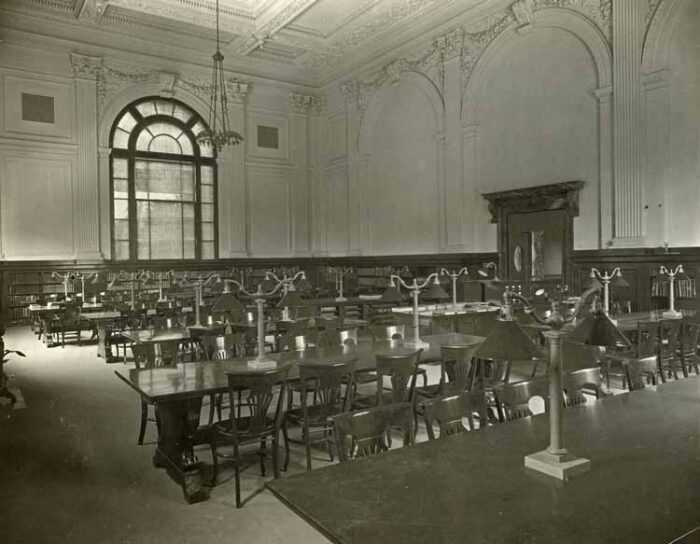 Designed by the Boston architectural firm of Shepley, Rutan and Coolidge, this stately public library was a gift to the community by the Grand Rapids native Martin A. Ryerson, a prominent Chicago businessman.  The building style is Beaux-Arts Classicism which gives it a formal and dignified feel.

History of the Library | www.grpl.org 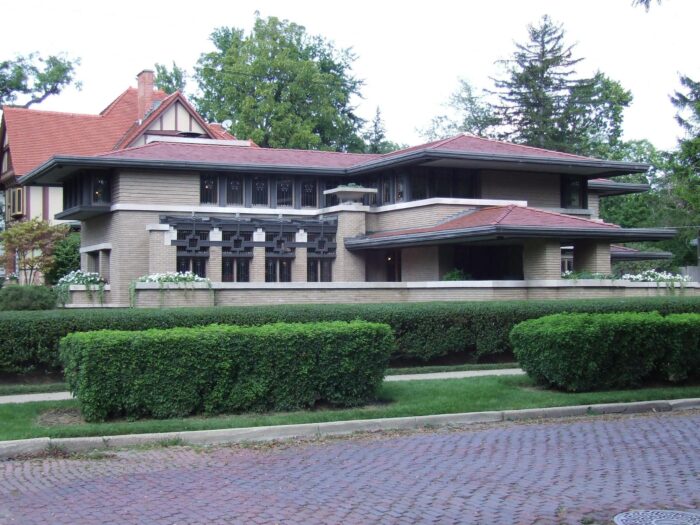 Completed in 1909, this residence was Frank Lloyd Wright’s first major commission in Michigan, and it remains an outstanding example of his Prairie style.  The house’s appearance stands in stark contrast to the Victorian houses typical of the period and the surrounding historic Heritage Hill neighborhood.  The house features all of Wright’s signature motifs, from the shallow hipped roof to the broad overhangs and the skillful use of terraces and gardens.  The home was purchased by the Steelcase furniture company in the 1980’s and underwent one of the most precise and complete restorations of a Wright home anywhere.  Today, the home is open for tours and is a “must see” for any trip to Grand Rapids. 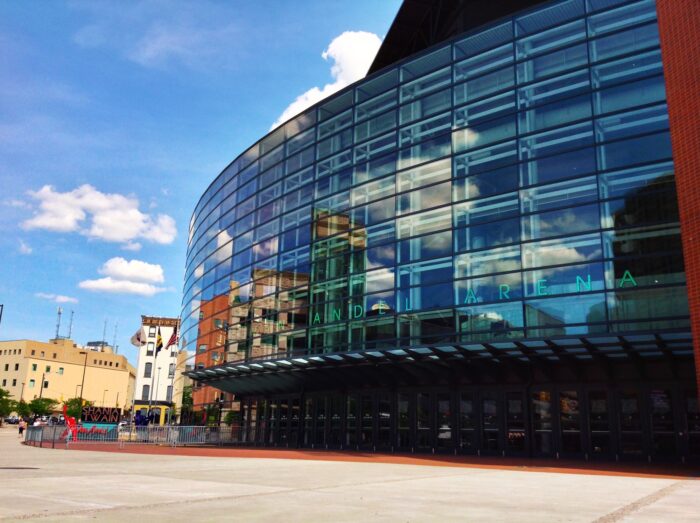 Designed by Rossetti Architects, the 12,000-plus seat Van Andel Arena opened in 1996.  This downtown building is considered by many as one the first examples of a modern design in what has been mostly a traditional cityscape.  Civically as well as architecturally, the arena, with its winged roof and curved glass façade, proclaims that downtown Grand Rapids is alive and well.  Since the arena opened, downtown has seen several new modernist designs, including the new Art Museum and the DeVos Place convention center. 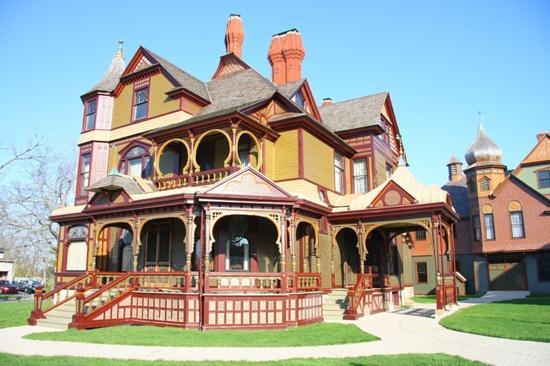 Millionaire lumber baron Charles Hackley built this house in 1889 for himself and his wife.  The Queen Anne style mansion was designed by David S. Hopkins, and is a picturesque blending of asymmetrical massing, polychromatic exteriors and a wealth of gables, chimneys, porches and bays.  The wood carvings are exquisite and the leaded glass windows are exceptional.  The Muskegon County Museum has restored the house and operates it today. 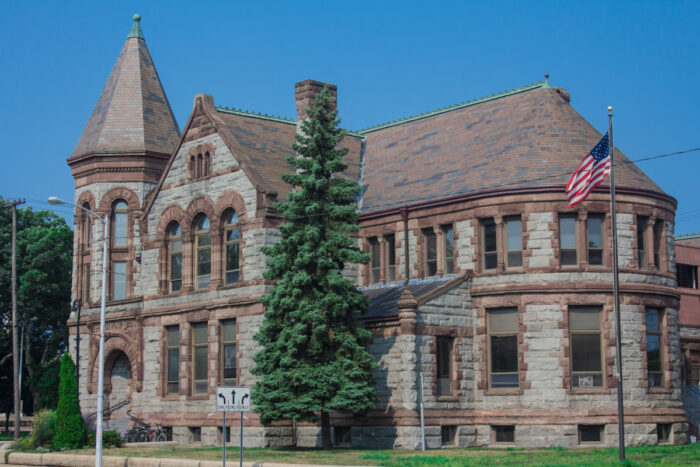 The Muskegon community was gifted this sturdy stone structure by Charles Hackley, one of the wealthiest men in America.  The deep-cut arched entrance, the octagonal tower, and the large gable on the upper level all contribute to the Richardsonian Romanesque style building.  The building was completed in 1890 and was designed by Patton and Fisher of Chicago.  Compare this structure to the Grand Rapids Public Library; both are examples of millionaires’ gifts that took different stylistic paths to the same end of public-spirited generosity. 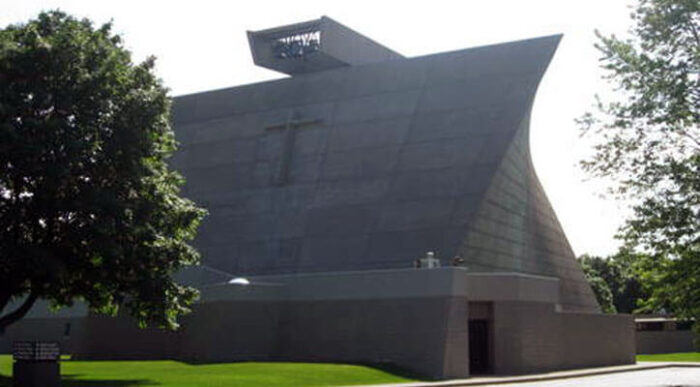 The internationally acclaimed mid-century modernist Marcel Breuer designed only a couple of buildings in Michigan, but this Catholic church in Muskegon, finished in 1966, ranks high among his world triumphs.  The church was designed about the same time he designed the Whitney Museum of American Art in New York City.  Please see the “Must See Michigan Architecture” article on the St. Francis de Sales Church in this same newsletter. 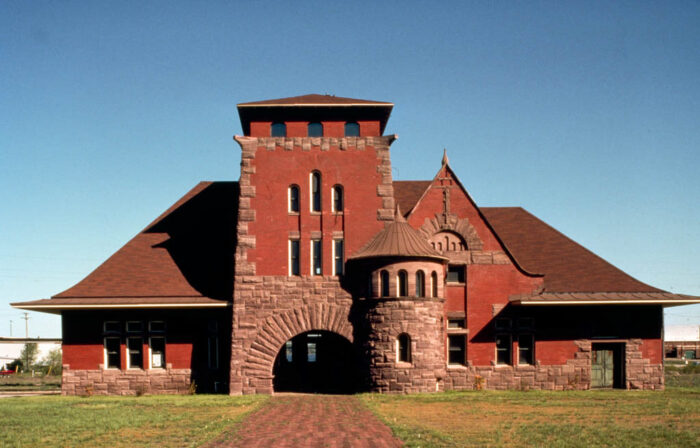 A small-town train depot takes on fairy-tale proportions in this picturesque composition by architect Sidney J. Osgood.  The great squat tower could easily pass for a samurai castle, the baby turret at its side fit for a maiden’s rescue, and the deeply recessed entry within the massive Romanesque arch a dragon’s lair.  Muskegon County acquired and restored the station in the early 1990’s after Amtrak discontinued service between Muskegon and Holland. Today the Depot serves as the home of the Muskegon County Convention and Visitors Bureau. 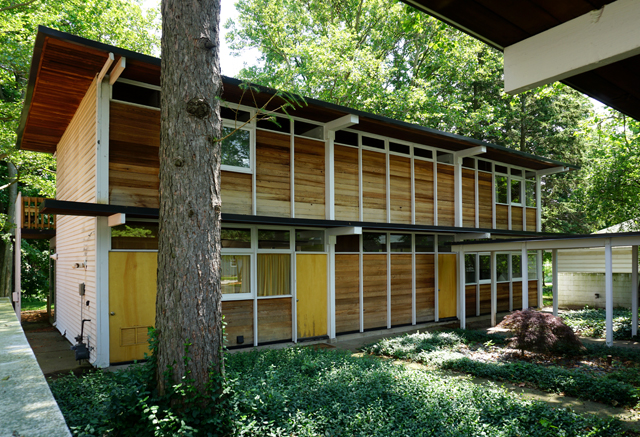 The internationally famous furniture designer, Charles Eames, designed this house for Max DePree, son of the founder of Herman Miller.  The classically modern structure sits in a modest neighborhood of small homes in Zeeland.  The home bears a resemblance to the Eames’ famous Case Study #8 in California.  This version though, is softer and warmer, and built by local craftsmen.  The overall impression of tranquility is reinforced by the wooded site. 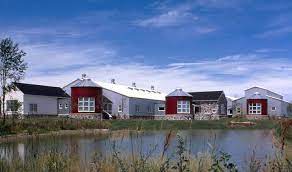 Designed by Meyer, Scherer and Rockcastle (MSR Design), this corporate office has become a playground of sorts for creative adults.  Completed in 1989 and set in rural Michigan outside Holland, the design yard is meant to evoke one of the neighboring farmsteads.  The complex incorporates modified prefabricated metal structures, silos and houses which were designed to accommodate changing uses and future expansion.  Inside past the lobby, it’s all fun mixed with work in open and flexible interior spaces.