It’s time for another MAF Architecture Road Trip! Let’s explore some of the great architecture in Wayne County, and specifically in Dearborn and Detroit.  As always, our tour stops are all included in MAF’s book, Great Architecture of Michigan; each entry below contains the corresponding page in the book where you will find more information and photos on the architecture you’ll see on our road trip. Buckle your seat belts – let’s go! 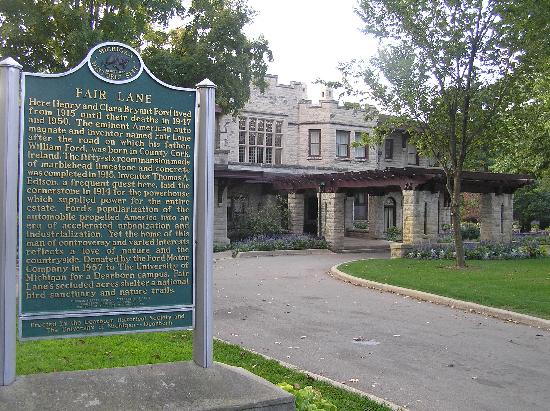 The estate of Ford Motor Company founder Henry Ford and his wife, Clara Ford.  The 31,000 square foot home was built on a 1,300-acre estate along the Rouge River.  Ford hired Marion Mahony Griffin, a former student of Frank Lloyd Wright with the firm Von Hoist & Fyfe, to design a Prairie style house.  After a trip to Europe, where the Fords saw and appreciated English manor homes, they changed their plans and hired William Van Tine to revise their plans to the unique style that was ultimately built.

Fair Lane – Home of Clara and Henry Ford: About (henryfordfairlane.org) 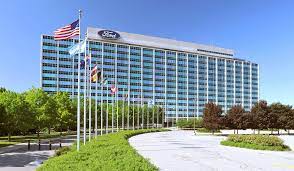 Completed in 1956, this 12-story office building still looks refreshingly crisp and new.  Designed by Skidmore, Owings & Merrill, the modern glass-walled building advanced the form of office design in important ways.  To free up space on interior floors, structural support columns were kept on the outside wall, thereby opening up the interior for flexibility in planning.  The building is set back from the streets and has often been described as a “tall city in a park”. 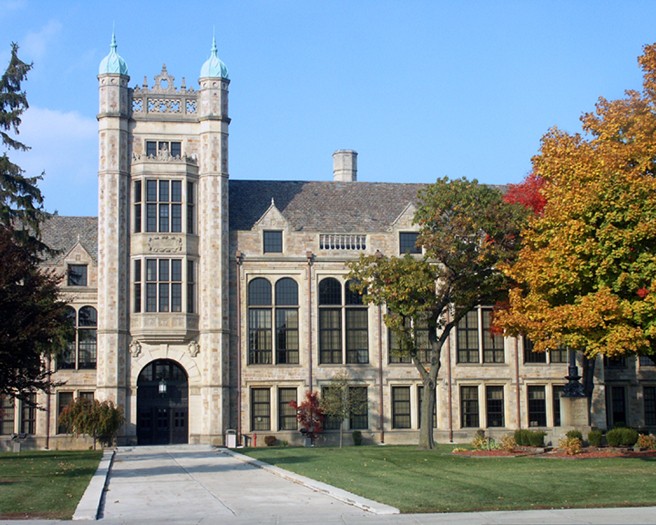 When it was dedicated on March 22, 1928, Fordson High School was hailed as “one of the finest school buildings in the United States.” Designed in the Neo-Tudor style, the school is reminiscent of sixteenth century English universities and manor houses. The tower was inspired by the Yale University Memorial Quadrangle and the Lawyers Club at the University of Michigan.  The building was designed by Everett Lane Williams of the Detroit firm of VanLeyen, Schilling and Keough and is an impressive example of “Collegiate Gothic”. 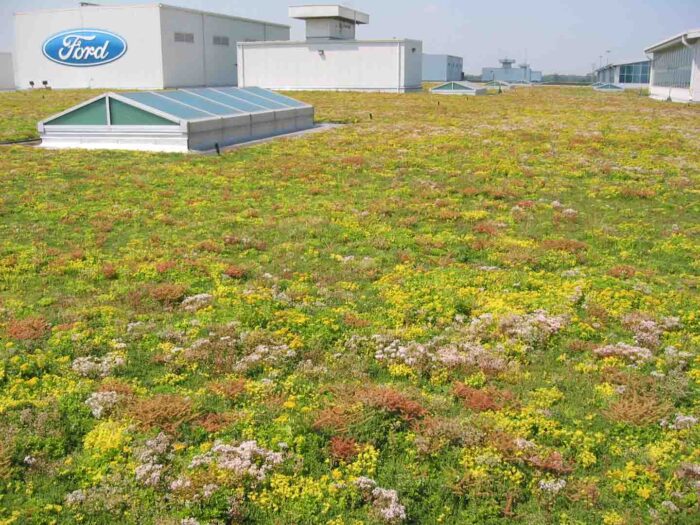 The Rouge became Henry Ford’s ultimate expression of unified and efficient production.  Beginning in 1917, the plant ultimately grew to a 2,000-acre facility and employed more than 100,000 workers at its peak capacity in the 1930s.  Ford hired Albert Kahn to design the beginnings of the complex and Kahn did not disappoint his client.  Kahn’s Rouge glass plant was regarded at the time as an exemplary and humane factory building, with ample natural light provided through clearstory windows which marked a new style in industrial design.

Through Edsel Ford’s support, Mexican artist Diego Rivera was invited to study the facilities at the Rouge. These studies informed his set of murals known as “Detroit Industry” which surround the interior Rivera Court in the Detroit Institute of Arts.  The Dearborn Truck Plant final assembly building on the campus is planted with a drought-resistant groundcover called sedum that spans 454,000 square feet (or 10.4 acres) and is one of the largest living roofs in the world. 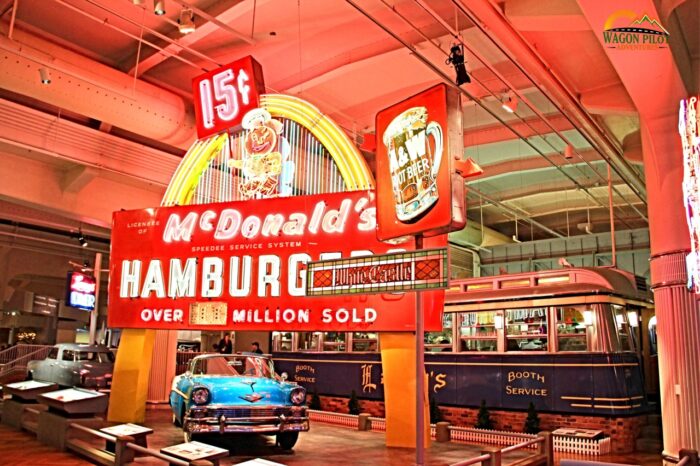 Dedicated in 1929, the museum now known as at The Henry Ford was designed to house Henry Ford’s immense collection of Americana.  Designed by Robert O. Derrick, the museum contains over 523,0000 square feet of exhibit space and incorporates faithful reproductions of Independence Hall in Philadelphia as well as the neighboring Congress Hall and Old Philadelphia Hall.

If you visit, don’t miss Buckminster Fuller’s prototype for the Dymaxion house, which was intended to be a factory manufactured kit that was to be assembled on site. 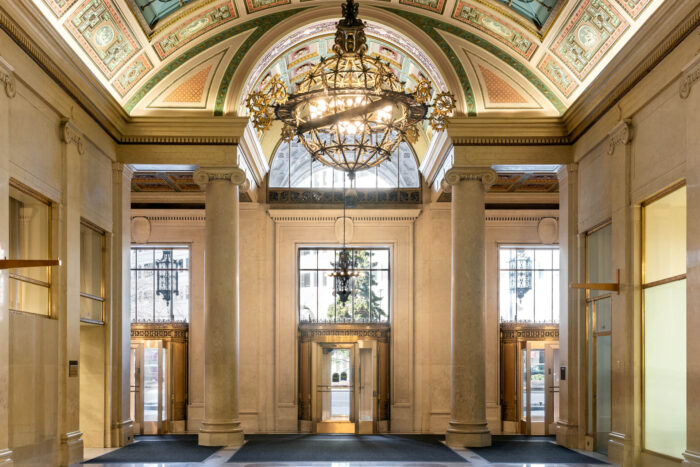 Formerly known as the General Motors Building, the building was designed by Albert Kahn and constructed in 1922 to be the headquarters of General Motors.  At the time it was built, this was the second largest office building in the world.  Under Kahn’s delicate hands, the building has the classic elements of early skyscraper design, including a renaissance arcade at the street, an unornamented “shaft” and a Corinthian colonnade at the top.  After GM moved its headquarters to the Renaissance Center in the 1990s, the State of Michigan moved into the renovated landmark. 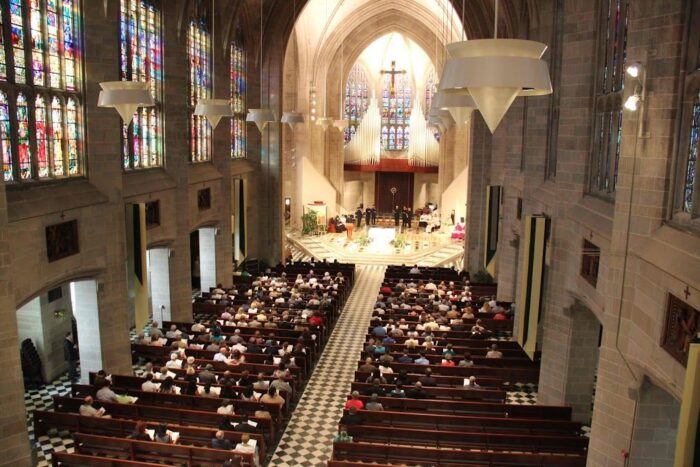 Cathedral of the Most Blessed Sacrament:  Detroit, Page 104

Originally designed by Henry Al Walsh, the construction of the Cathedral was started in 1913 with portions of the building completed in 1915, but construction moved rather slowly.  The interior was finished in 1930 and the exterior was not completed until 1951.  Because Walsh was not able to see the project to completion, Detroit Architect George Diehl was chosen to complete the project.

In 2001, Gunnar Birkerts was selected to update the Cathedral.  The church stands today as one of the city’s most impressive Neo-Gothic structures with a wealth of beautiful detail.

History | Cathedral of the Most Blessed Sacrament (aod.org)

Cathedral of the Most Blessed Sacrament — Historic Detroit

Cathedral of the Most Blessed Sacrament – Wikipedia A masterpiece by famed architect Albert Kahn, this building is considered one of his best.  The dramatic silhouette of the tower owes much to both Romanesque precedents and Art Deco imagery and is probably the finest in the city.  Please see the “Must See Michigan Architecture” article on the Fisher Building in this same newsletter issue. 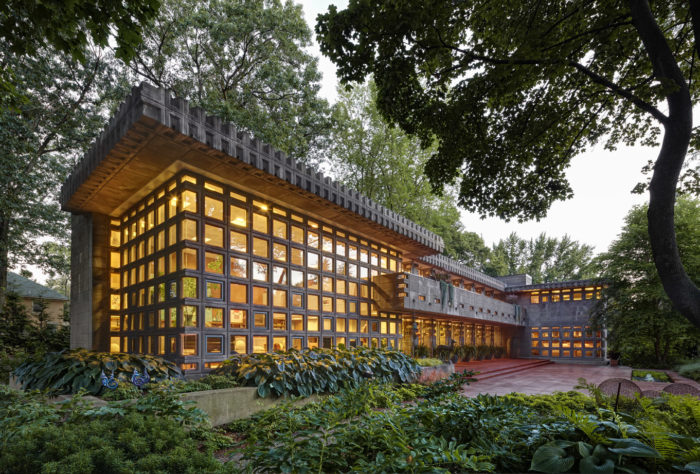 Designed by Frank Lloyd Wright and constructed in 1956, this home is the only Wright home built within the city limits of Detroit.  This residence is the only example of a two story “Usonion Automatic” design.  The home is constructed entirely of concrete block in more that 36 patterns.  Set in Detroit’s upscale Palmer Woods district, the home stands out as a bold experiment in an area filled with Todor and other historical styles.  It is speculated that Wright would have appreciated any discomfort that he caused the neighbors.  photo: @ James Haefner Photography Saint Florian Parish was founded in 1907 to serve the Detroit area’s rapidly expanding Polish Catholic community. By the 1920s Saint Florian was the second largest Catholic parish in Detroit, and it required a larger church. The Reverend John Bonkowski hired Boston architect Ralph Adams Cram to design this building, inspired by the Gothic churches of the Middle Ages. The church’s medieval style contrasted with the modern industrial community.