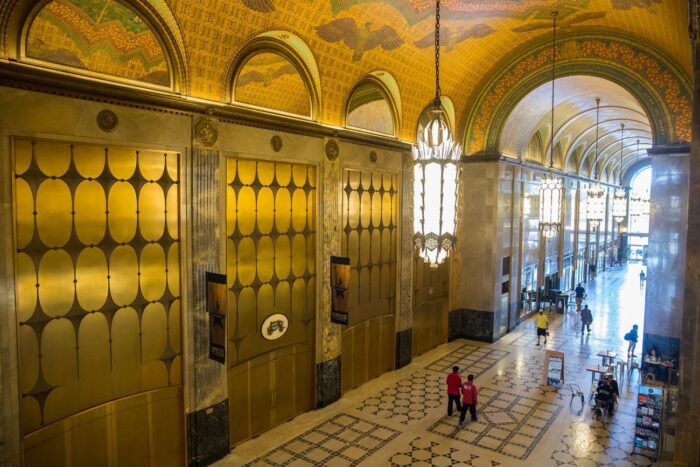 Designed by the renowned Detroit architect Albert Kahn, the Fisher Building opened in 1928. The Fisher Brothers chose a site in the New Center area of Detroit near General Motor’s headquarters after GM purchased their company, Fisher Body Co.  The Art Deco building boasts nearly half of a million square feet of space with a 444-foot-tall tower flanked by two 11 story wings. The original design called for three towers but due the onset of the Great Depression, the design was reduced to a single building. Construction was completed at a cost of $9 million and in an astonishing 15-months’ time.

The building is lavishly appointed inside and out with several different varieties of marble, granite, limestone, bronze, and extensive artwork including sculpture, frescoes, plasterwork, and stone carvings. 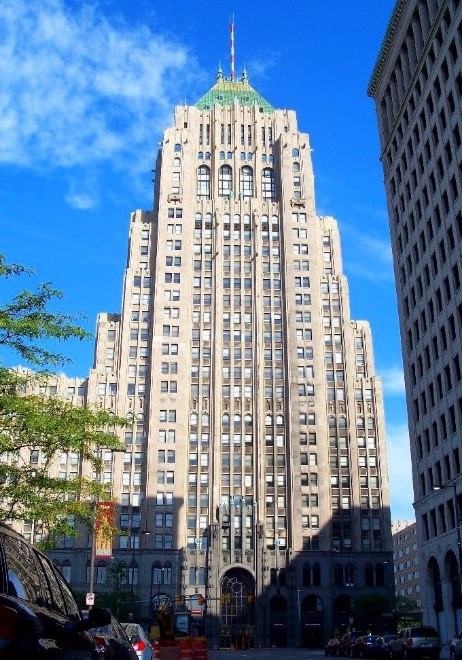 The tower’s roof, originally clad in glistening gold-leaf covered plates, was coated with asphalt during World War II to conceal it from potential enemy attack.  After the war, the roof was covered with green terra cotta tiles when it was found that the black coating could not be removed.  The rooftop’s iconic golden appearance has since been re-created utilizing gold-hued lighting.

“The gold-capped tower has taken its proper place in Detroit’s ever-changing skyline…This will be the most beautiful building of its kind ever created. … It is an outstanding example of the new American school of architecture, which has arisen to typify the spirit of modern progress. No expense, Mr. Kahn said, has been spared to make the Fisher building the very epitome of things beautiful.” – The Detroit News, October, 1928.

The building was awarded the Architectural League of New York’s Silver Medal in 1929, and was cited as the most beautiful commercial structure of the year.  The Fisher Building was added to the National Register of Historic Places in 1989.

Check out more of Michigan’s Must See Architecture. 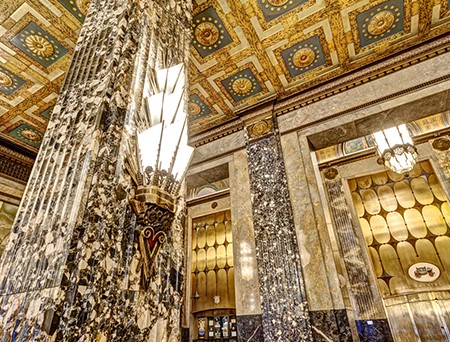