A Different Side of Kahn:
Albert Kahn-designed Jewels
on Belle Isle

Most people familiar with architect Albert Kahn’s work know how instrumental he was in Detroit’s industrial and office projects, like the Art Deco masterpiece, The Fisher Building. What may not be more widely known is that Kahn also designed two of Belle Isle’s architectural jewels: the Belle Isle Aquarium and the Anna Scripps Whitcomb Conservatory. The buildings – the oldest public aquarium in the continental United States and the oldest continually running conservatory in the United States, respectfully – are two of many examples of the architectural legacy Albert Kahn created in Detroit.

You can see more of Kahn’s work in the exhibit, “Albert Kahn: Innovation and Influence on 20th Century Architecture” is designed to raise awareness of the life and legacy of the renowned architect, which runs through July 3, 2022 at the Detroit Historical Museum. (read the MAF article).

(project descriptions below are courtesy of the Detroit Historical Society website, www.detroithistorical.org). 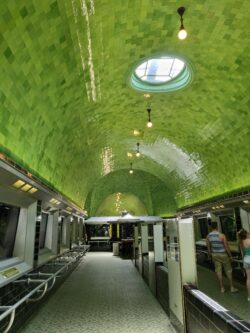 First opened on August 18, 1904, the Belle Isle Aquarium is the oldest public aquarium in the continental United States and, at the time of its opening, the third-largest in the world. A carving of Neptune, the Roman god of the sea, greets visitors above the entryway, inviting guests into the long, domed-ceiling structure that houses over 50 tanks of fresh and salt-water aquatic life. The aquarium was designed by architect Albert Kahn. Glass sea-green tiles line its walls and ceiling to give it an “underwater” feeling. According to the Belle Isle Conservancy, Kahn intended for the fish to be like art hanging on the wall in a gallery. A renovation in 1954 added an 8,531-gallon tank to the center of the building, covering a large pool in the original structure. Previously, the tanks were made of wood and glue. After the renovation, they were made of concrete. This renovation also involved structural repairs as well as updates in lighting and water filtration.

The aquarium was shuttered by the city in 2005 due to budgetary constraints. Dedicated Friends of the Belle Isle Aquarium volunteers maintained the building until its much-anticipated reopening on September 15, 2012. Since then, fundraising efforts by the non-profit Belle Isle Conservancy have continuously worked to improve and restock exhibits. Nor have these efforts been limited to exhibits. Roof repairs and window tuck-pointing efforts have been carried out so as to help reopen and expand hours. Meanwhile, two of the building’s skylights were restored and opened in 2014 with new pendant lighting added to the Aquarium to help look more like the system of lighting that it had when it was opened.

The Belle Isle Aquarium lies adjacent to the Anna Scripps Whitcomb Conservatory. These two historic treasures continue to play a large role in family visits to Belle Isle Park, as they have for over 100 years. 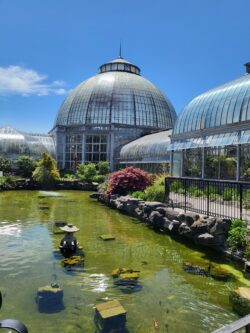 The Anna Scripps Whitcomb Conservatory is the oldest continually running conservatory in the United States. Located on Belle Isle, it contains a collection of rare and exotic plants from around the world, including palms, tropical plants, cacti, ferns and one of the country’s largest orchid collections. These are housed in five climatic areas: the Palm House, the Cactus House, the Fernery, the Tropical House, and the Show House. Its impressive collection makes it one of the most popular destinations in Detroit.

Construction on the Conservatory began in 1902 according to the designs of architect Albert Kahn, who along with George Mason also designed the adjacent Belle Isle Aquarium. It was built in the European Modernist style and many of its elements were inspired by Thomas Jefferson’s Monticello home. The building was originally constructed with glass and a wooden frame, but the wooden frame was replaced with a frame made of steel and aluminum in 1949. The Palm House, which houses tropical trees and palms, sits under an 85-foot-tall dome. The impressive building sits on an acre of land, and outside, the Conservatory’s remaining 12 acres host a lily pond garden, perennial garden, fountain, and seasonal floral beds.

Before 1955, the Anna Scripps Whitcomb Conservatory was known as the Horticulture Building or, simply, the Conservatory. However, on April 6, 1955, the Conservatory was dedicated to Anna Scripps Whitcomb, who donated her rare and extensive orchid collection. Her collection contained 600 rare orchids, many rescued from Britain during World War II. Thanks to her donation, the City of Detroit became home to one of the largest municipally-owned orchid collections in the United States.