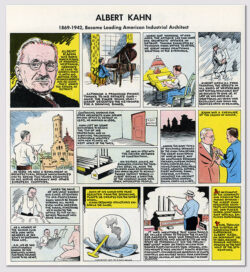 You may know Albert Kahn as the architect of Detroit’s Fisher Building and early 20th century automotive factories. What you might not know is just how influential Kahn was in shaping the future of both industrial design and the evolution of professional architecture practice. A new exhibit at the Detroit Historical Museum, “Albert Kahn: Innovation and Influence on 20th Century Architecture” is designed to raise awareness of the life and legacy of the renowned architect and tell the story of Kahn’s historically significant architecture that has stood the test of time in Detroit, in Michigan, and around the world.

The exhibit runs through July 3, 2022.  The Albert Kahn Legacy Foundation received a MAF Architecture Awareness Grant to help fund the creation of the exhibit.

Born to a Jewish family in 1869 in Germany, Albert Kahn was the eldest of eight children, and at age 12, emigrated to Detroit with his family. He was among the most well-known and prolific industrial architects of the twentieth century, and his work enabled the creation of America’s modern industrial enterprises. Kahn’s firm was the first in Detroit and one of the first in America to offer in-house engineering services – an important innovation that facilitated the design of the more complex industrial and commercial structures required in the 20th century. 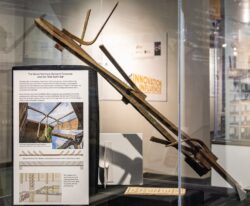 According to Michael G. Smith, Historian and Founding Director, Albert Kahn Legacy Foundation, research, planning, and securing artifacts for the exhibit took over a year. Among the exhibit artifacts is a ‘Kahn Bar’, a steel bar that could be used to reinforce concrete without slippage and structural weakening, which was invented by Albert’s brother Julius Kahn, a civil engineer. Julius patented the Kahn Bar, and in 1903, formed the Trussed Steel Company (Truscon) to manufacture them. Within a couple of years, the bars were widely used, and steel-reinforced concrete became the norm. The bar in the exhibit is from the Great Northern Cement Company warehouse building in Marlboro, Michigan – the first fully reinforced concrete building in the state, and the first building constructed using the Kahn Bar system. The building was designed by Albert, engineered by Julius, and constructed by Truscon.

Other artifacts in the exhibit include a set of three wooden models of buildings designed by Albert (the models, of Bass wood, were made by LTU students), along with photos, video clips, Lego building models, and other items. “It’s no secret that Kahn is often described as the foremost American industrial architect of the 20th century, whose ideas and impact are still felt today,” said Smith. “One of the other things we want visitors to learn is the important role both Kahn brothers, and Detroit, played in revolutionizing concrete construction.” Smith stated he also hopes the exhibit clears up some misconceptions about Albert Kahn’s work. “For example, it is widely thought Ford’s Packard Number 10 Plant (designed by Albert and built by Julius) was the first concrete auto plant,” he says. “But Truscon had already built a concrete plant for Cadillac that was designed by architect George D. Mason.  Packard 10 followed. And Albert’s first ground-up industrial design project was actually for a factory in Scotland, for the Consolidated Pneumatic Tool Company in England (1903), which used early hand-built versions of Julius’s Kahn bars. That building is still in use today.”

Smith continues, “Detroit became the epicenter for industrial design and for architecture in general in the early part of the 20th century, due largely to the presence and practice of Albert Kahn,” said Smith. “And there is no escaping the fact that industrial architecture design at the time was largely, if not almost entirely, Kahn’s influence. Additionally, during that period, nearly every architect in Detroit at one time or another worked for Kahn’s firm. They wanted to work there to learn Kahn’s practices, processes and procedures, which were years ahead of what other firms were doing.”

Watch the segment on the exhibit on Detroit’s WDIV-TV 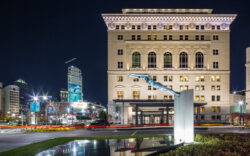 He also designed numerous iconic office and civic buildings, homes, and religious structures, including the Detroit Athletic Club, Belle Isle Aquarium and Conservatory, the former General Motors headquarters, the Edsel and Eleanor Ford House, and many buildings on the University of Michigan campus, including Hill Auditorium and the Carillon Tower.

Kahn’s projects also include the Ford Highland Park factory (Highland Park, MI, 1909), designed to produce the Model-T, and the first factory to build cars using a moving assembly line. The plant became known as the “Crystal Palace” for its extensive windows comprised a simple steel sash and glass panes, which could easily be inserted in the building frame and allowed better illumination and ventilation.

“We also want exhibit visitors to become aware of Detroit’s importance to the world, in winning WWII, and to appreciate you could come to Detroit from anywhere in the world to build your success if you worked and studied hard,” said Smith. “It was an exciting time, and we want to see people feel that sense of excitement through the exhibit.”

Smith adds that MAF’s Architecture Awareness Grant played an important role in the exhibit. “The MAF grant was the first money the Albert Kahn Legacy Foundation received to support the exhibit,” he said. “The grant gave us the confidence to move forward with planning the exhibit, and to reach out to other donors for additional funding. It was a big sign we were going to succeed.”

“Albert Kahn: Innovation and Influence on 20th Century Architecture” will be on display in the Community Gallery of the Detroit Historical Museum, 5401 Woodward Avenue, Detroit, through July 3, 2022.  https://detroithistorical.org/.  Entrance to the exhibit is free with museum admission. The museum closed is Monday-Wednesday; check the museum website for hours.

The Albert Kahn Legacy Foundation is a non-profit organization that was formed to celebrate and preserve the legacy of Albert Kahn. For more information, visit https://albertkahnlegacy.org/about/