The Affleck House was built in 1941 by Gregor and Elizabeth Affleck on a steeply rolling site in Bloomfield Hills Michigan.  The couple admired the work of Frank Lloyd Wright, particularly the Edgar Kaufmann House, commonly referred to as Fallingwater.  Although it was constructed within a few years of Fallingwater, the Affleck House is markedly different.  The home is modest in size at 2,300 square feet and follows the egalitarian principles laid out by Wright in his writings during the 1920’s and 1930’s. Wright called his ideal community Broadacre City, located in “Usonia” (standing for the United States of North America). His vision for society included one-acre residential lots on which would be built low-cost Usonian Houses for average citizens. In actuality, only about 60 Usonian homes were ever built, and most would not be considered affordable. 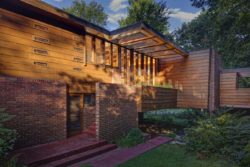 The Usonian model does not include a garage, basement, or attic, such spaces were considered by Wright to be inefficient and promote clutter.  The Affleck home does include a small basement due to the foundation required on the steep site.  The lower-level houses a workshop, laundry area and a maid’s quarters, an interesting contradiction to the “everyman” concept, and particularly in this case, since the Affleck’s never employed domestic help. 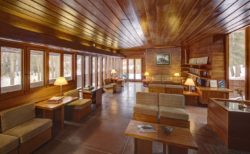 The main level of the home features a clear hierarchy of space from public to private.  The brightly skylit entry foyer occurs at the intersection of the public and private zones and is anchored by the fireplace hearth, which is the symbolic heart of the home.  The public areas are in a linear arrangement and include a living/music room, dining, and a terrace that runs the length of the home.  The kitchen is out of view yet still connected to the “open” living area.

The interconnection of the public spaces, while very common today, was innovative at the time, when typical homes featured distinct rooms for each purpose separated by walls and doors.  The elimination of excess compartmentalization and circulation maximizes the plan’s efficiency.  A second rectilinear form, perpendicular to the public areas, contains the private sanctum of the home.  The spaces include a bedroom and den, shared bathroom, and the master suite at the terminus.  The wing is set several feet above the main floor level, enhancing the private nature of the spaces. 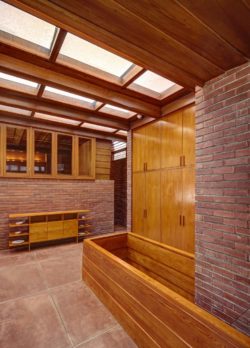 Privacy is further enhanced by the use of skylights and clerestory windows to shield the inhabitants from public view while allowing daylight to permeate the space.  Full-height windows grace the ravine side and overlook the natural wooded setting.  Wright carefully positioned the home to take advantage of sun, daylighting, breezes, and views.  Floors are constructed of stained concrete encasing tubing for in-floor radiant heat. Built-in elements are incorporated throughout to maximize space; even passageways and under-stair spaces serve double duty as areas for shelving and hidden storage.

The home also boasts passive cooling via “trap doors” that open through the floor of the loggia, exposing a pool of water below, allowing cool breezes to enter the center of the home.  Natural materials used in construction, including brick and cypress, serve to harmonize with the wooded setting.

The Afflecks lived in the home until their deaths in the 1970’s, at which time the Affleck children gifted the house to Lawrence Technological University. Extensive restoration has been completed and the Gregor and Elizabeth Affleck House was added to the National Register of Historic Places in 1985.  LTU will offer tours of the Affleck House on the 3rd Saturday of the month in May, June, and July this year.  For tour and ticket information visit LTU’s website or https://www.eventbrite.com/cc/frank-lloyd-wright-affleck-house-tours-193659.