The Robert and Barbara Schwartz House was constructed from 1964-1967 and sits on a wooded lot in northwest Midland, Michigan.  The home has 4,300 square feet of living space on three levels, within a 28’ tall hemispherical dome form.  Architect Robert Schwartz designed the structure to be his family home.  Schwartz had an affinity for modernism and specifically, dome forms that can be traced back to a special project he completed in 1954 while an architecture student at the University of Michigan. Under the tutelage of R. Buckminster Fuller who was best known as the inventor of the Geodesic Dome, a team of students, Schwartz among them, designed and erected a low-cost dome shelter.  Robert Schwartz graduated from the University of Michigan, returned to the Midland area, and became a licensed architect in 1958. 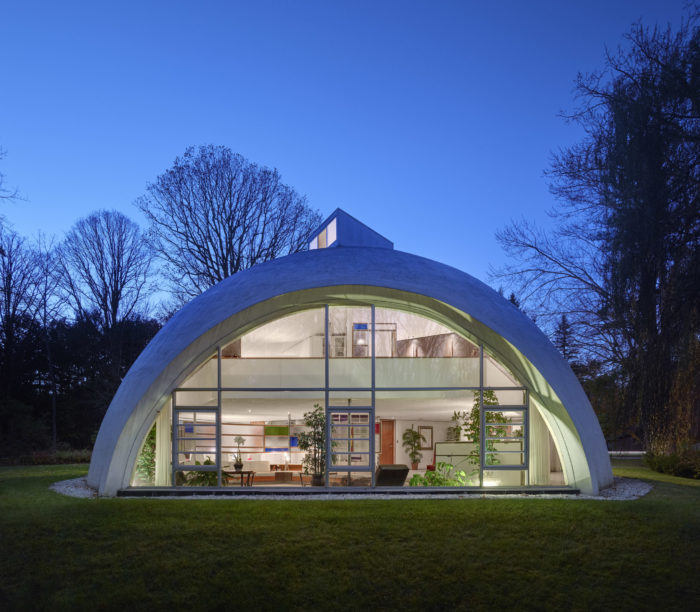 The Schwartz House was conceived in collaboration with Dow Chemical Company as a demonstration of Dow’s experimental Spiral Generation Method of construction that was patented in 1944.  The technique involved the extrusion and fusing Styrofoam strips concentrically to form a dome.  The Schwartz home’s Styrofoam dome was completed in just 14 hours by two workmen using a machine designed by Dow specifically for that purpose.  Reinforcing steel was then laid over the 4” thick foam dome and a 3” layer of concrete was spray applied to the interior and exterior of the shell using the Gunite method.  Three large 15’ tall arched openings were later cut out of the shell and infilled with aluminum and glass window-walls.  The only other opening is a 5’ diameter bubble skylight at the dome’s oculus, which has since been replaced with a more advanced indirect light monitor.

The interior of the home is organized around a central spiral staircase.  The ground floor has an essentially open floor plan including a living room, kitchen, dining room, powder room, and study.  The second level houses four bedrooms and the bathroom.  Interestingly, the upper floors do not extend to dome itself.  The floors stop several feet short, with straight wall segments forming a hexagon that appears to float within the hemispherical space.   The third-floor recreation room is similarly pulled away from the shell, providing a very early application of passive daylighting and ventilation. 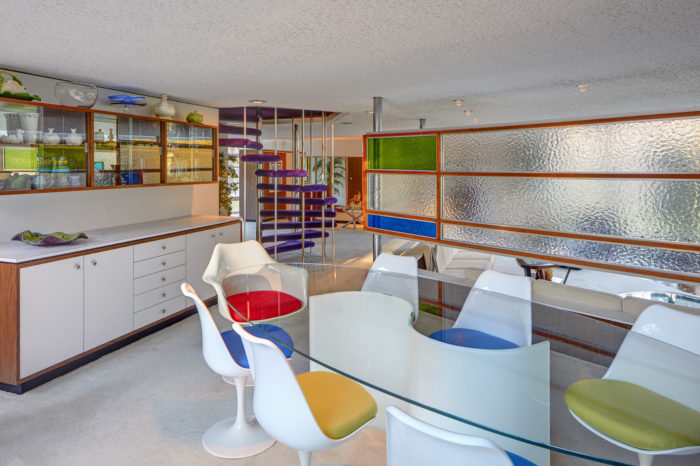 Robert Schwartz continued to live in the home until his death in 2010. Very few modifications have been made to the home since its construction, making the Schwartz House a strikingly intact example of Midcentury Modernist architecture.

See more photos of this and other Must See Michigan Architecture: https://michiganarchitecturalfoundation.org/…/must-see…/