The 2021 President’s Scholarship:
Honoring the late AIA Michigan Presidents Behind the Scholarship 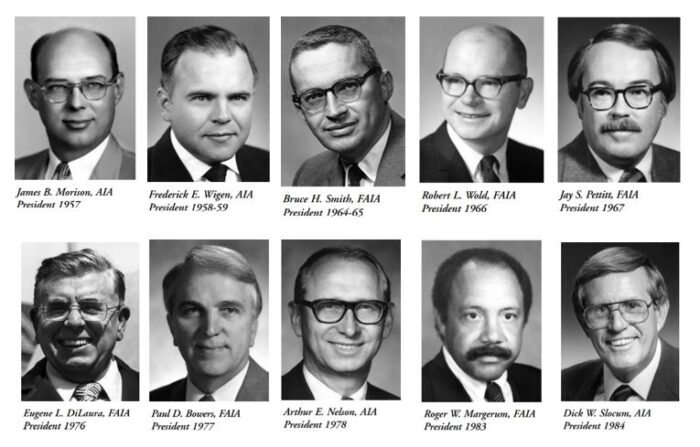 Twenty-eight years ago, 17 past AIA Michigan presidents founded a scholarship that recognized outstanding student leadership in both the community and profession. It was an investment in the future of the profession and the quality of architecture in the state of Michigan.

Beginning with a modest $1,000 in 1992, today the AIA Michigan President’s Scholarship awards $6,000 to a deserving architecture student enrolled in a Michigan college or university architecture program.

Bruce Smith, FAIA (Detroit) – Partner in the firm Smith & Smith in Royal Oak, Bruce was a leader in school design and a strong voice in the community throughout his career.

Robert Wold, FAIA (Grand Rapids) – Co-founder of firm Wold, Bowers and DeShane, Robert was a gifted leader in both the profession and community.

Art Nelson, AIA (Saginaw) – Art was active in the community, leading a playground installation for children. He also worked for Alden B. Dow during the 1960s and 1970s, and responded to the energy crisis of the time.

Roger Margerum, FAIA (Detroit) – A role model for African-American architects, Roger started his career at Smith, Hinchman & Grylls and later formed his own firm. Throughout his career, he positively impacted the City of Detroit and the profession.

Dick Slocum, AIA (Kalamazoo) – Dick was an example of a humble leader, and a content-driven and results-oriented professional. In 1970, he founded his own firm, which became focused on environmental awareness and energy conservation.

The Michigan Architectural Foundation’s 2021 President’s Scholarship salutes these ten leaders and their contributions to building strong leaders in our profession and state.  Your generosity will help continue to grow the amount of the scholarship in relation to the costs of an architectural education. Visit michiganarchitecturalfoundation.org/donors to make a contribution.