The Edsel and Eleanor Ford House is located on the shore of Lake St. Clair in Grosse Pointe Shores, an affluent community located just northeast of Detroit.  Edsel Ford, the only child of the Ford Motor Company founder Henry Ford, took over as company president in 1919 at the tender age of 25.  The young executive and his wife Eleanor moved into their new home in 1928.  They engaged renowned Detroit architect Albert Kahn to design the estate on 87 lakefront acres. Albert Kahn had an ongoing relationship with the elder Ford, having designed his Model T plant in Highland Park in 1908 and subsequently several other Ford Motor Company facilities. The long-standing relationship between the two men is particularly striking considering Ford’s unabashed antisemitism. 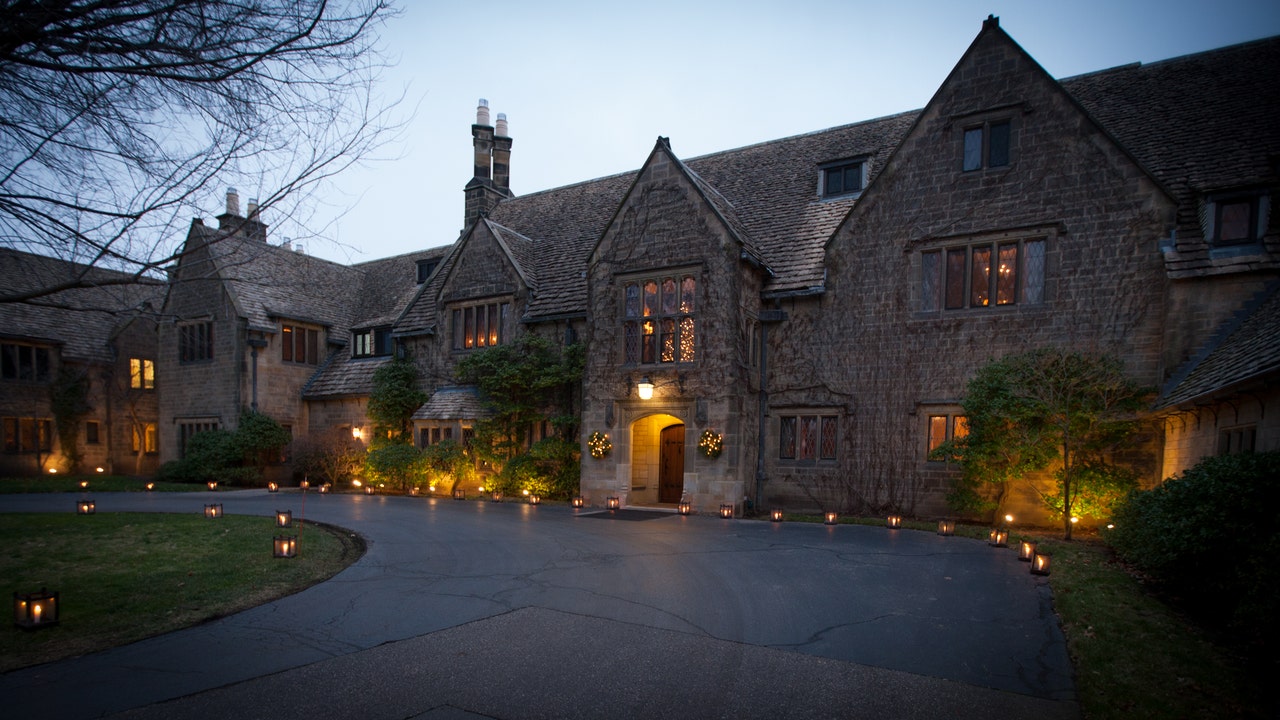 Edsel and Eleanor were drawn to English manor architecture and settled on the Cotswold village aesthetic, often referred to as “Storybook Style” which features steep roof pitches and prominent gables, large chimneys, and limestone masonry exteriors.  Although the 20,000 square foot, 60-room home was constructed in one year, it took over two additional years to carefully appoint the interiors with antique architectural elements including wood paneling, staircases, chimneypieces, and mantels which had been salvaged from old English manors and carefully reassembled here by English craftsmen, imported to the area specifically for that purpose.   Interestingly, none of the rooms of the home are appointed in a specific period.  Rather than creating historical reproductions; interior elements from many genres intermingle successfully to evoke the comfortable, homey Cotswold aesthetic the Fords were so fond of.  Some areas of the home are appointed in an entirely different style, including the children’s bedrooms which were designed in a markedly modern style by Industrial Designer Walter Teague.

The 87-acre grounds were designed in a naturalistic style by Jens Jenson, one of America’s foremost landscape designers.  The landscape includes woodlands, meadows, and wetlands designed to engage all five senses.  The estate grounds also feature formal gardens, pools, a powerhouse, a gatehouse, and a child-sized playhouse that was a gift from Clara Ford to granddaughter Josephine on her seventh birthday in 1930.

The Fords raised their four children on the estate and continued to reside there until their deaths.  Edsel died in the home in 1943 and Eleanor lived there until her death in 1976, at which time her bequest was that the home and property be used for “the benefit of the public”.

The Edsel and Eleanor Ford House is open to the public for tours and special events (including holiday tours; see the article elsewhere in this newsletter).  For more information and to plan a visit go to: www.fordhouse.org