McGregor Conference Center is located on the campus of Wayne State University in Mid-town Detroit.  Designed by acclaimed architect Minoru Yamasaki, the center opened in 1958 and was intended to serve both the academic institution and the local community as a venue for events, meetings, and gatherings.  The McGregor Conference Center consists of two identical, mirror image pavilions housing conference rooms located on either side of a striking two-story high atrium.  The building is raised several feet above the street on a marble plinth, reminiscent of the classical Greek temple.

Although clearly Modernist in design, Yamasaki’s approach was strikingly humanist.  Rather than rejecting historical forms, Yamasaki incorporated them with deft skill, making the space at the same time forthright and spare yet also serene and comfortable, unlike some, more rigorous, International Style buildings that can be perceived as cold and harsh.  Yamasaki’s design approach evolved into a modernist genre now known as “New Formalism”. 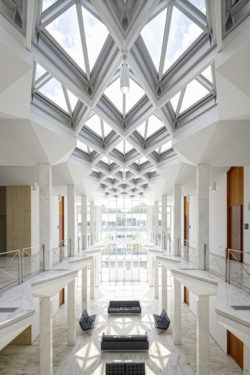 While McGregor Conference Center is quite simple in program, organization, and material, its vibrancy comes from the incorporation of warm teak interior accents and repetition of pyramida and triangular motifs. Marble is used throughout the structure, as wall sheathing, flooring, and even walking-path gravel and roof ballast.  The clean appearance and white color provide a suitably muted background for the spectacular pyramidal skylight that runs the entire length of the atrium, the glass enclosure continuing to the floor at each end to form the dramatic entry porticos.  The contrast might be jarring if not for the repetition of the geometric motifs throughout, including on railings, balconies, and aluminum sunshades, resulting in a cohesive whole.

Yamasaki realized that as important as the building itself was, the site was integral to the project’s success both as the gateway to the university from Detroit’s urban core and as a space for respite and reflection.  The Conference Center is bound on two sides by an L-shaped reflecting pool, accessed from the building by a stair that descends to one of three rectangular islands that seemingly float just above the water’s surface.  The regularity of the islands and linear connecting bridges are punctuated by seemingly randomly placed boulders.

McGregor Conference Center impresses today and much as it did in 1958 and is a testament to Minoru Yamasaki’s enduring legacy.  His goal to “create a structure in harmony with both man and it’s environment” has been realized in this small, unassuming building.  McGregor Conference Center is truly a space that provides “delight, serenity, and surprise”, just as Yamasaki had hoped it would be.

See more photos of this and other must-see Michigan architecture: https://michiganarchitecturalfoundation.org/michigan-architecture/must-see-buildings/