Douglas House, located in Harbor Springs Michigan, sits perched among the treetops on a bluff overlooking the sparkling waters of Lake Michigan. This iconic residence endures as among architect Richard Meier’s (b. 1934) most recognizable works. Built in 1973 as a private residence for the Douglas Family, the home maximizes its location to capture dramatic vistas across the waters of Michigan’s second-largest Great Lake. The gleaming white and glass cubic form contrasts against the lush greenery surrounding it and is best viewed from the water itself.

The barely seen street side provides a protective buffer-zone and is accessed via a footbridge into the home’s uppermost level, offering the inhabitants a heightened sense of privacy. The home’s interior layout reinforces an increasingly private sequence from entry to interior by locating functional and utilitarian spaces as a transition between the outside world and inner sanctum. This is achieved both horizontally from the street toward the shore and vertically as one proceeds down into the lower levels of the home. 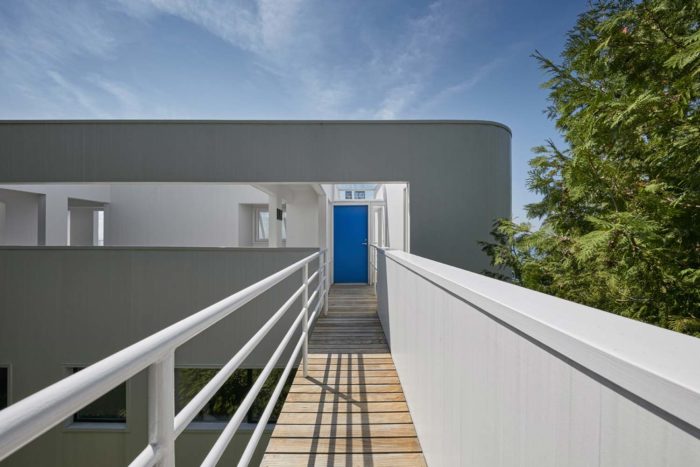 Once inside, spectacular views become the focus. The central fireplace anchors the main living space that is dominated by glass and clean white lines. The exterior features expansive water-side decks that occur above and below the main levels, preserving unencumbered views from the primary interior spaces.

Minimalist detailing and expansive windows enhance the outward focus, allowing the natural beauty of the surrounding landscape to dominate the interior spaces. Subtle detail elements such as the exterior staircase and simple pipe-railings harken to nautical themes, further reinforcing the home’s connection to the area’s seafaring history. 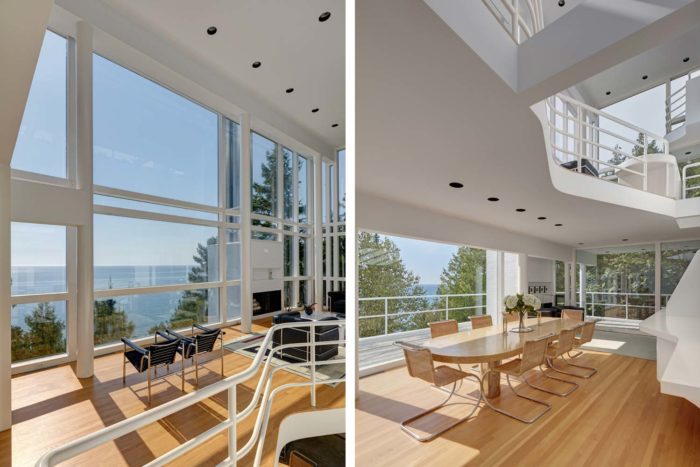 Douglas House was included as one of the top 150 structures on the American Institute of Architects’ “America’s Favorite Architecture” list in 2006 and was added to the National Register of Historic Places in 2016, enshrining it as a much-loved part of the northern Michigan landscape.