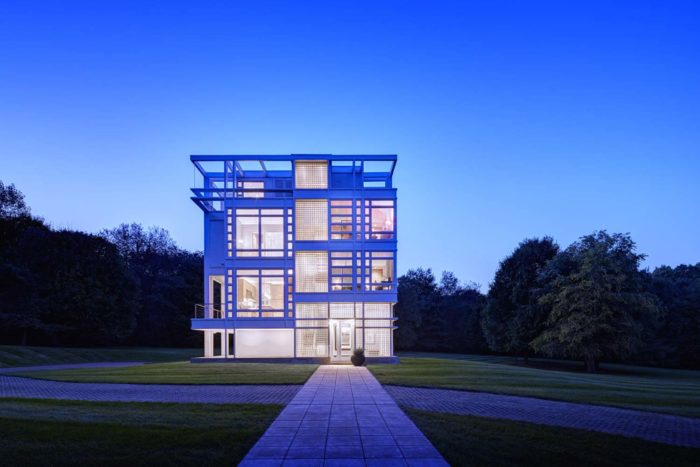 Devon House is located just outside Grand Rapids in Ada, Michigan.  The private residence sits at the crest of a rise on a 10-acre parcel, providing commanding views of the surrounding wooded landscape from the rooftop deck.  The perfect 42-foot cubic form stands in striking contrast with the natural surroundings. Designed by Chicago-based architect Dirk Lohan, FAIA, and completed in 1992, the home’s glistening white timber framing, glass blocks, expansive windows, and minimalist detailing set a distinctly Modernist tone, not surprising considering the architect’s lineage.

Lohan is the grandson of architect Ludwig Mies van der Rohe (1886-1969), famously known as a pioneer of the Modernist movement.  Lohan’s career started under van Der Rohe’s tutelage as a student in the architecture program at IIT, and later as a young architect working in Mies’ Chicago firm.  The Devon house was designed during Lohan’s tenure at Lohan Anderson, the firm that evolved from van der Rohe’s practice after Mies’ death in 1969. (Lohan currently is the senior leader of the firm).

Lohan’s connection to Mies is manifested in the design of the Devon house.  According to the architect’s description, the home’s cubic form is a “three-dimensional evocation of Mies’ Farnsworth House.  The house revolves vertically and horizontally around a stair, with living areas and bedrooms on staggering levels, culminating in a roof deck with 360-degree views”. 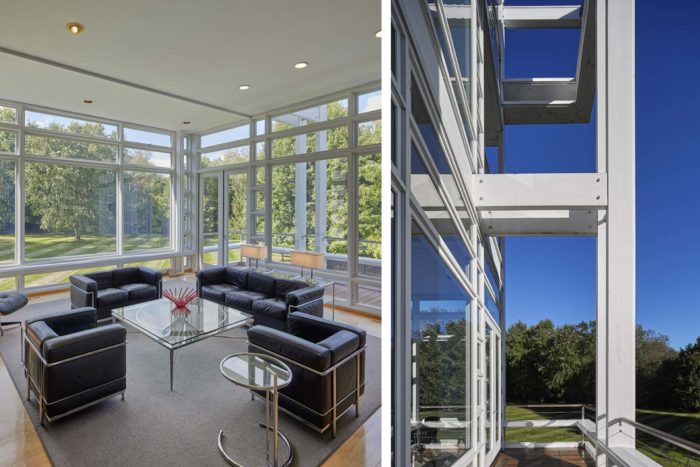 The home’s interior features simple detailing and clean lines, allowing the impressive views through the floor to ceiling windows to become the focal point of most interior spaces.  Maple hardwood floors provide warmth to the spaces.  Maple is also used for the floating stair treads and on vertical planes via cabinets and built ins.  Private and semi-private spaces utilize translucent glass block rather than transparent glazing, providing dramatic daylighting inside during the day, and a spectacular glow in the landscape at night.

Lohan’s Devon House is a contemporary interpretation of Mies van der Rohe’s famous quip “less is more”.  Scarcity creates interesting architecture but often at the expense of livability, a common complaint among occupants of purely modernist residences. The Lohan’s design utilizes Modernism tempered by rationality to create spaces that are both aesthetically pleasing and comfortable. 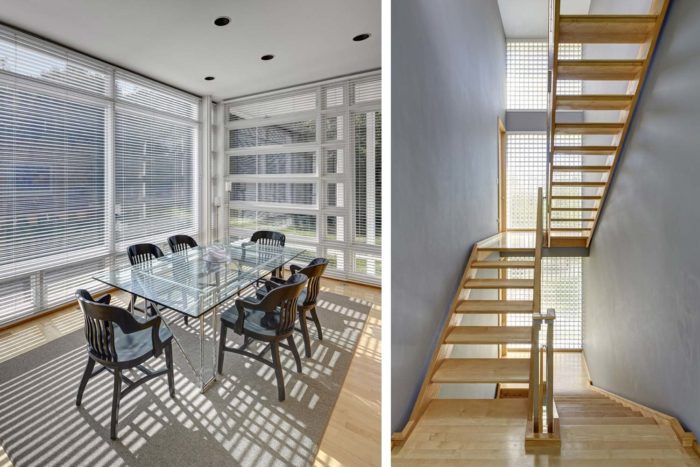