The “Law Quad” is an important space at the University of Michigan’s picturesque Ann Arbor campus.  Neo-gothic buildings, mature shade trees, and broad lawns with intersecting pedestrian pathways combine to create a quintessential campus environment.  Preservation of the storied campus is a priority that can conflict with the need for growth and expansion.

In the late 1970’s the University’s Law Library was faced with the dilemma of how to add much-needed space while upholding the historic integrity of the gothic-styled building as well as maintaining the open-spaces of the campus as a whole. 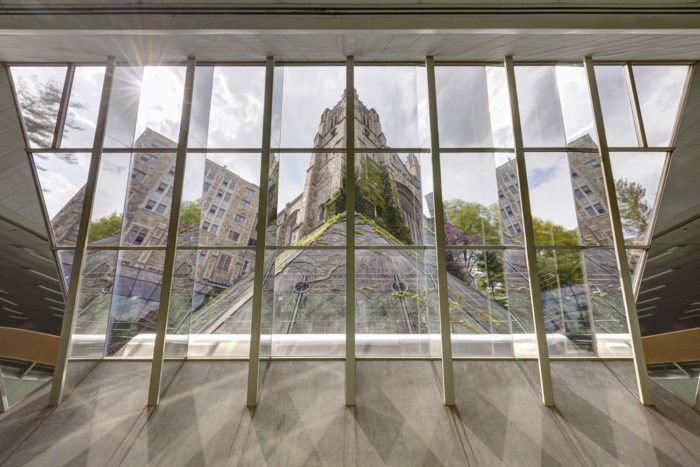 The result is a surprisingly pleasant space, filled with sun, reflections, and skyward views.  Each level of the L-shaped addition opens to the light well’s slanted limestone wall.  The furthermost corner of the addition boasts another skylight element to bring daylight into the furthest reaches of the building.

The 77,000 square foot Allen and Alene Smith Law Library Addition opened in 1981 to widespread critical acclaim, and continues to serve as an impressive symbiosis of contemporary architecture cohesively bound to a traditional college campus.

See more photos of the project and more Must See Michigan Architecture.