Have you ever looked up and marveled at the meticulously detailed sculptures that decorate Michigan’s buildings? Jeff Morrison has – and he wants you to know more about them.

Jeff is the author of the upcoming book ‘Guardians of Michigan: Architectural Sculpture of the Pleasant Peninsulas,’ which explores, explains, and documents Michigan’s architectural sculptures on a city-by-city and building-by-building basis. Jeff received a Michigan Architectural Foundation (MAF) Architecture Awareness Grant to support the project’s development.

Guardians of Michigan will feature photos of sculptural details and reliefs from more than 440 buildings in over 160 cities and towns throughout the state, including the Jackson Citizen Patriot Building, Bay City’s First Presbyterian Church, Rochester’s Meadowbrook Hall, Lenawee County Courthouse, Battle Creek’s Central National Tower, University of Michigan Law Quadrangle, and Highland Park’s YMCA North Branch. The book is designed to appeal to anyone with an interest in architecture, art, and Michigan history. Jeff also authored the award-winning book ‘Guardians of Detroit: Architectural Sculpture in the Motor City,’ published by Wayne State University Press. 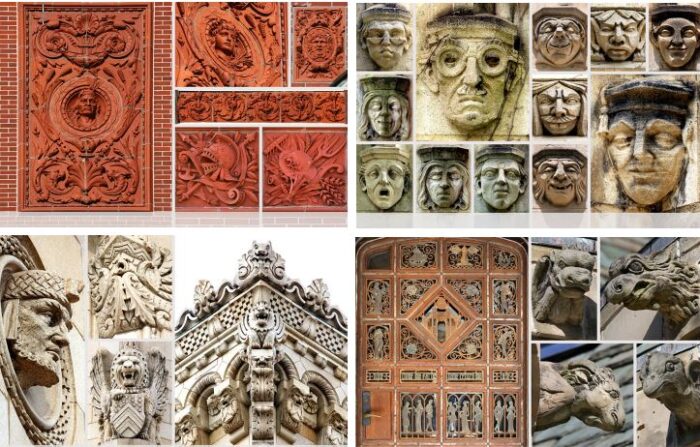 Architectural sculpture is more than just ornamentation. During its heyday, the sculptures defined building functions such as banking and commerce, with symbols that stood for trust, protection, and safety, among others. The sculptures were a source of pride and prosperity and affluent building owners were willing to pay the extra expense for them.

When asked if he has a favorite set of building sculptures, Jeff responds “it’s the next one!” and names Detroit’s Trinity Episcopal Church, Meadowbrook Hall, and the Scripps Mansion in Lake Orion among his favorites. He also cites Bay City’s wealth of architecture and architectural sculpture that its residents take pride in preserving, and many of Michigan’s small towns, home to county courthouses with breathtaking architectural sculptures, as unexpected surprises.

How does Jeff think architecture enriches life? “Architecture and architectural sculptures are public art,” he says. “You don’t have to seek it or search for it, it’s readily accessible and out in the public realm for all to enjoy. One of my goals with both books is to increase awareness and appreciation of the beauty and benefit of having these great buildings and their sculptures in our communities.”

Jeff is currently research, writing, and taking photographs for Guardians of Michigan: Architectural Sculpture of the Pleasant Peninsulas, and has a preliminary agreement with Wayne State University press to publish the book; publication is planned for late 2021 or early 2022. Jeff invites anyone with suggestions of interesting architectural sculpture for inclusion in the book to reach out to him through his website at GuardiansOfDetroit.com or via email at GuardiansOfMichigan@nullgmail.com.