In 2007, the Grand Rapids Art Museum, affectionately known as the GRAM, opened to the public in the heart of downtown Grand Rapids, Michigan.  Initial design work was commenced in 2001 By the London, England firm, Munkenbeck & Marshall, and the project was ultimately executed by architect Kulapat Yantrasast of the Los Angeles, California firm wHY. The local firm Progressive AE (formerly, Design Plus) acted as the Architect of Record throughout the design and construction process. 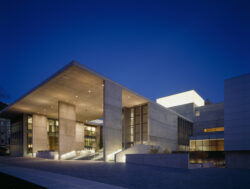 The clarity of the 125,000-square-foot minimalist concrete edifice conceals the complexity that went into creating the first LEED® (Leadership in Energy and Environmental Design) Gold-certified art museum in the nation.  The $75 million dollar project was supported by patron Peter Wege (whose father founded the local furniture behemoth Steelcase) with a gift of $20 million on the condition that the building be environmentally sustainable.  Yantrasast utilized strategies such as daylighting with stunning results. Over 75% of the building’s interior receives natural light via three large lanterns that also lend to the building’s iconic appearance, particularly at night.  Additional sustainable design elements include a highly efficient climate-control system, excellent insulation, water-conserving fixtures, and rainwater recycling.  “We use the term “invisible green” to assert our belief that sustainability should be inherent to design – an accepted necessity rather than an optional add-on” states wHY Architects.

The front of the building features a 140-foot wide, and 120-foot deep sheltered “porch” overlooking Maya Lin’s land sculpture “Ecliptic” and Rosa Parks Circle.  The 3.5-acre site creates an urban oasis, described by the architect as ” … a welcoming, convivial destination characterized by dynamic connections between indoor and outdoor spaces”.  The monumental scale of the covered entry portico elevates the importance of the building and communicates the value ascribed to art in Grand Rapids.  A universal love of art is an integral part of the Grand Rapids community’s collective identity, and the GRAM is a fitting representation of it.

See https://www.artmuseumgr.org/visit to plan your visit and get information about upcoming events and exhibits.

(photos courtesy of the GRAM, Progressive AE and Rockford Construction)