It’s that time of year again – MAF’s Architecture Road Trips are back! It’s the perfect time to head out, whether by car or on foot, to experience Michigan’s great architecture.

Let’s kick off the season with a visit to Downtown Detroit.

It’s no secret that in recent years, downtown Detroit has experienced a renaissance with new restaurants, retail, hotels, and housing. Providing the perfect backdrop for all of the new investment in the city is the incredible wealth of Detroit architecture.  If you haven’t been to Detroit for some time, or if you are a fan of the city’s great new offerings but are not familiar with its rich architectural history, take an Architecture Road Trip (or walking tour), to see and experience the beauty and splendor of downtown Detroit architecture.

As with past road trips, you can see each of the entries on this month’s road trip in MAF’s book, ‘Great Architecture of Michigan’ (each entry contains corresponding page numbers from the book). 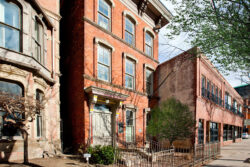 This stately three-story townhouse built in 1851, was among many that lined Detroit’s East Jefferson Avenue in the Civil War era and that gave the early city a sturdy elegance.  One of the lone survivors of that time, it was carefully restored by AIA Michigan in the 1980s and served as the home to AIA Michigan and MAF until the property was sold in 2015.  The building is one of the oldest remaining houses in Detroit and was designated a Michigan State Historic Site in 1975 and is listed on the National Register of Historic Places.

Critics may argue that the innovative and modernist architect Gunnar Birkerts produced a Howard Johnson’s here and not a church.  But there’s no denying the power and originality of the form.  The entire structure reaches heavenward, and the dramatic orange color punctuate the otherwise traditional cityscape.  Built in 1977, Calvary Baptist rises just outside the gate of Detroit’s historic Elmwood Cemetery. 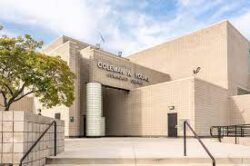 Architecture serves the people in many ways, here as a recreation center in the heart of inner-city Detroit.  The center built in 1981 and designed by William Kessler and Associates is deceptively simple.  What appears at first to be a purely functional structure emerges on closer viewing as a careful study in geometry and massing.  As this center shows, a tight budget in a struggling city does not preclude fine architecture. 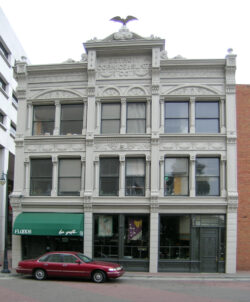 The original building here sported one of Detroit’s most effusive facades.  The Beaux-Arts confection was not, despite its look, cared stone.  Rather, Detroit Cornice and Slate made architectural ornament from pressed and hand-hammered steel that was then painted to resemble a more expensive limestone or marble.  The original building was designed by Harry J. Rill and was built in 1897.  A major expansion and renovation for Metro Times newspaper, completed in 1999, was designed by William Kessler and Associates. 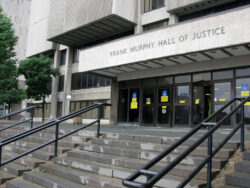 The term Brutalist architecture derives from a French phrase meaning “raw concrete” and not as its critics claimed, from the style’s perceived arrogance and coldness.  Even so, many untrained eyes may see something alien and unapproachable in this striking tower.  But look closer at this 1968 structure designed by Eberle M. Smith and Associates.  See how the vertical slabs and delineated sections express in a no-nonsense manner the internal scheme of courtrooms, detention facilities, and offices.  Observe how, some 50+ years later, the structure still projects a bracing clarity and efficiency.

Anyone who doubts that urban vitality lies in preserving older, human-scale buildings need only visit Greektown to be convinced.  This collection of humble Victorian-era commercial structures, built in the mid-to-late 1800s has evolved over time into one of Detroit’s liveliest tourist destinations.  The creation of Greektown Casino in the late 1900s added a new presence—the latest chapter in a neighborhood that began as a pioneer farm, morphed into a German and then a Greek enclave, and today pulses to the beat of urban entertainment.

Perhaps unique among ‘50s-era urban development schemes, Lafayette Park proved the success that its creators hoped for and remains an urban oasis today.  Constructed between 1956-63, this development was designed by the best in the business.  Master planner Ludwig Hilberseimer mapped out the 78-acre cluster of residential components grouped around a central park; and architect Ludwig Mies van der Rohe crafted a series of high-rise and low-rise structures that emphasized privacy and serenity in the midst of the bustling city. 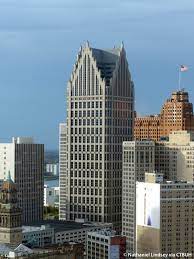 One of Detroit’s few examples of the Post-Modern architectural movement that swept numerous cities in the 1980s and ‘90s, One Detroit Center is also notable as the city’s only offering from the legendary architect Philip Johnson and his partner John Burgee.  The spiky top could be interpreted as Flemish Gothic or something out of a Batman movie.  A dominant image on the skyline, this 1992 structure provided a shot of adrenaline downtown during the long drought between the Renaissance Center in the 1970s and the rebuilding that has enlivened downtown during the last decade. 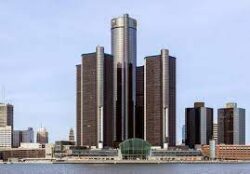 Detroit’s postcard image, the Renaissance Center is all gleaming dark glass, as impersonal perhaps as the tinted windows of a rich man’s limousine, yet a powerful expression of a city’s pride all the same.  Designed by John Portman and completed in 1977, the complex consists of four 39-story octagonal office towers that surround the 73-story hotel cylinder.  In the mid-1990s, General Motors bought the building for its world headquarters and hired Skidmore, Owings & Merrill to complete a major renovation to aid the navigation of the public spaces on the lower floors and to create the light-filled Wintergarden and a new riverside plaza. 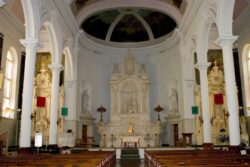 The oldest surviving church building in Detroit, Saints Peter and Paul went up while Abraham Lincoln was practicing law and still endures today.  The style is closest to English Regency with classical motifs.  The church was designed by Francis Letourneau and was constructed between 1844-1848 and has served as a symbol of Roman Catholicism in the city for more than 150 years.

There are many varieties of Gothic Revival architecture; this Roman Catholic parish in central Detroit utilized the hall church model from southern Germany.  The parish arose to serve Detroit’s German population, and architect Francis G. Himpler was Berlin trained.  Built in 1873, the workmanship is especially fine, and the stained-glass windows are nationally recognized for their quality.  The eight-sided bell house was added in 1883 and the impressive spire 10 years later. 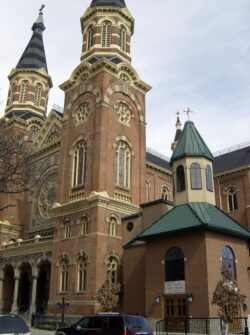 A twin-spire church is always visually arresting, seldom more so than in this exuberant composition in what is now Detroit’s Greektown district.  St. Mary’s remains one of Detroit’s oldest active parishes, founded in the 1830s to serve the city’s German-speaking Catholics.  Designed by Peter Dederichs and completed in 1885, this current church building shows the hallmarks of the High Victorian sensibility, with its effusive blend of influences and detail. 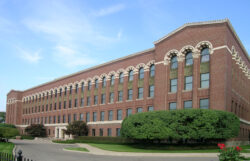 Built in stages by the pharmaceutical company Parke-Davis, this complex of two dozen or so buildings on the Detroit River was an early prototype of today’s corporate campus.  Beginning in the 1980s, the Stroh brewing family took over the then-empty structures and converted them into retail, dining, office space, and residential lofts.  Rare among Detroit’s waterfront projects in the ‘80s, Stroh River Place did not barricade itself behind security fences; its embrace of urban vitality looks wiser with each passing year. 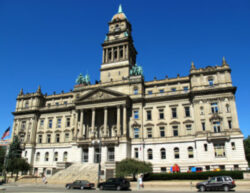 Built with pre-automotive fortunes when Detroit was just coming into its own, the Wayne County Building aimed at and hit a goal of being among the most sumptuous buildings in Michigan.  An outstanding example of Beaux-Arts Classicism, it features four stories of Ohio sandstone surmounting a rusticated granite base.  Baroque sculptural elements pierce the skyline, and a slim yet elaborate tower emphasizes the lofty ideals of a free people.  Designed by John Scott and built between 1896-1902, the building was later restored in the 1980s by Quinn Evans Architects and Smith, Hinchman & Grylls and remains one of Michigan’s architectural masterpieces.