Fall is the perfect time to take in Michigan’s incredible color change – and the state’s incredible architecture! This month’s MAF ‘Great Architecture of Michigan’ Road Trip takes us through Detroit’s Midtown. The area is home to many of Detroit’s celebrated, world-class museums and cultural institutions, and/or structures which help to preserve and tell the stories of the city’s past and present, including health care and educational facilities.

Once again, each of the stops on this month’s tour can be found in MAF’s Book, Great Architecture of Michigan, with corresponding page numbers on each of the entries.

Buckle up – let’s start our tour! 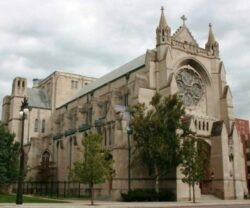 Designed by Ralph Adams Cram, one of America’s leading church architects, the cathedral stood on one of the city’s busiest thoroughfares, as a symbol of the spiritual in the midst of all that is material.  This elegant interpretation of English Gothic Revival features a wealth of beautiful detail, including a tile floor designed by Mary Chase Perry Stratton, founder of Pewabic Pottery.  The cathedral was completed in 1911, but interestingly, a planned square tower designed to rise over the crossing of the nave and the transepts has yet to be built.

A History of St. Paul’s Cathedral circa 1909 | The Cathedral Church of St. Paul Detroit (detroitcathedral.org)

Our History | The Cathedral Church of St. Paul Detroit (detroitcathedral.org)

When completed in 1997, this major addition to Detroit’s Cultural Center was the largest African American museum in the country, and a destination for visitors of all races and ethnic backgrounds.  Designed by Sims-Varner, one of the city’s most important African American architecture firms, the museum features abundant African design imagery, including columns based on a traditional African rope motif.

About The Wright | The Charles H. Wright Museum of African American History

Charles Lang Freer made his fortune manufacturing railroad cars, but he’s remembered chiefly for his art collection, today housed in Washington, D.C.’s Freer Gallery.  Yet his home in Detroit remains in some ways his most notable effort.  Foregoing the Gilded Age palaces favored by his contemporaries, Freer chose the quieter pleasures of the Shingle-style for his home which was built in 1890.  As Detroit scholar Dr. Thomas W. Brunk writes, “His home, like many of the contemporary American paintings Freer collected, was not created for public exhibition; rather this home reflected his own cultivated taste and discreet collecting habits.” 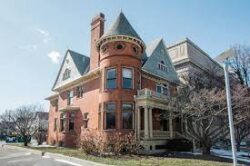 Scholar David Mackenzie built this home in 1895 for himself in the Queen Anne style, and it shows many characteristics of the type, with picturesque massing, the elaborate conical-roofed tower, and a variety of exterior surface materials.  Today, Mackenzie’s house represents one of Michigan’s great preservation wins.  The house was slated for demolition in 1975 to make way for a sewer line, were it not for two Wayne State classmates, Allen Wallace and Marilyn Florek who rallied like-minded people to convince the university to save the building.  Today it serves as the headquarters of Preservation Wayne, Detroit’s leading non-profit advocate for historic architecture. 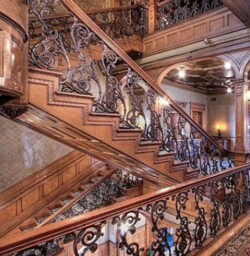 Lumbar baron and millionaire David Whitney, Jr. clearly was one who had the money to indulge his family’s whims.  Architect Gordon Lloyd concocted a rather overcooked exterior based on Romanesque Revival motifs.  The sumptuous interior is better, with a bevy of rooms that rank among the city’s most ornate.  Thanks to its conversion for use as an elegant restaurant, the house remains open to anyone for the cost of a meal.  This house is definitely worth a visit.

Inside The Whitney in Detroit, the historic home of one of Michigan’s richest families – mlive.com

The Detroit Institute of Arts (DIA) ranks among the world’s great museums and stands as an undisputed giant on the Michigan architectural scene.  Architect Paul Philippe Cret was born in France and brought a classical training to his commission here in Detroit.  The museum, completed in 1927, features a Renaissance-inspired look and the clear, logical arrangement of galleries around the central great hall.  Over the years, north and south wings were added amid multiple renovations and expansions, but Cret’s original still commands pride of place, a masterpiece where millions of Detroiters first learned about art.

Built in 1921, the Detroit Public Library has served generations of Detroiters who have ventured to the library to check out the latest mystery or thriller, track down ancestors in the old files, or research scholarly work in every topic imaginable.  The main branch could not have served so many for so long had not the talented Architect Cass Gilbert, later architect of the U.S. Supreme Court in Washington D.C., not done such a fine job creating it.  The library remains the perfect place to while away a lunch hour, complete a school paper, or nail down an elusive fact.  Facing the Detroit Institute of Arts across Woodward Avenue, the library forms one half of Detroit’s great architectural duo. 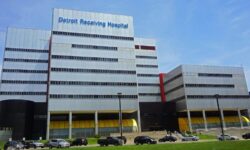 Completed in 1980, William Kessler’s Detroit Receiving Hospital introduced something new into the idea of a hospital even beyond the building’s silvery, high-tech look.  The hospital’s various buildings are arranged in cross-like forms with interconnected modules around 48-foot-square light wells, creating a new openness where older hospitals had offered cramped corridors.  The composition as a whole can be read as symbolic of modern medical marvels. 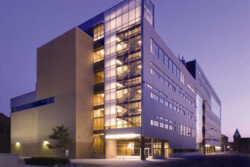 One of the flagship public schools in Detroit, this unique entity is as much performing arts center as classroom building.  Production spaces include an 800-seat auditorium, 200-seat recital hall, black box theater, television and radio studios, art studios and galleries, vocal and instrumental music rehearsal rooms, and top-floor media center and dining hall.  Designed by Hamilton Anderson Associates and completed in 2005, the school is located just steps from Woodward Avenue and the Max M. Fisher Music Center. This house ranks high among Michigan’s rare but incredibly fine examples of French Chateau architecture.  Col. Frank J. Hecker was a Union Army veteran and manufacturer and his sumptuous mansion with its 49 rooms and elegant marbles hints at what Detroit’s Gilded Age must have been like.  The house, completed in 1891, was designed by architect Louis Kamper, who was just emerging as the city’s master of opulent historical styles.  Kamper went on to craft the famed Book-Cadillac Hotel in the 1920s.

A college devoted to teaching painters, sculptors, photographers, and other creative types their trade needed a building to inspire its students.  Architect William Kessler gave the school just that with this boldly new and different exploration of structure, form and expression.  The 32-foot modules were designed to be stacked and added to as more space was needed.  Derided by some as a mere Lego toy, the building for many others has become a modern icon and a lasting symbol of the school’s creativity. 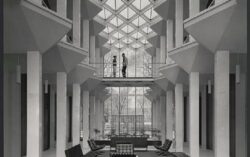 This jewel-like building, a ceremonial gathering spot on Wayne State University’s campus, shows the true genius of its designer, Minoru Yamasaki at his zenith.  As with the best of Yamasaki’s work, there is the elegance, the simplicity, and the sense a viewer gets that building and site were made for each other. Please see the “Must See Michigan Architecture” article on the McGregor Memorial Conference Center in this same newsletter for more on the building. 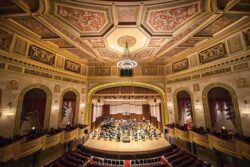 The great theater architect C. Howard Crane, who went on to craft the Fox and other movie palaces in Detroit, did this job in a rush under threat of losing Detroit Symphony conductor Ossip Gabrilovich unless a proper home for the DSO was built.  Completed in 1919, the theater appears a little boxy on the exterior with its Neoclassical ornament applied rather perfunctorily.  The interior on the other hand, is an acoustical and artistic marvel, and a fitting home for one of the nation’s greatest musical ensembles. Incredibly, this landmark faced the wrecking ball in 1970, but was saved and restored under the loving hand of noted preservation architect Richard C. Frank.