New Life for a House of Healing:
The Village at Grand Traverse Commons 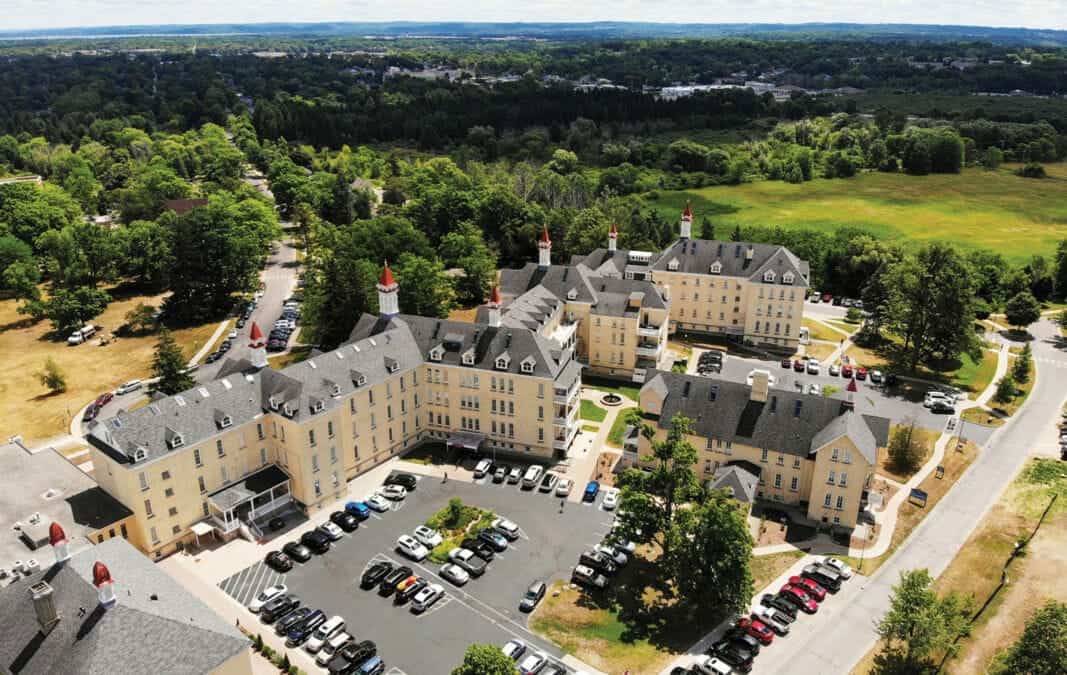 Did you know the bustling mixed-used development “The Village at Grand Traverse Commons” was originally constructed in 1885 as a hospital for the mentally ill?  It was known as the Traverse City Regional Psychiatric Hospital and Northern Michigan Asylum for the Insane.

Formal treatment, rather than mere warehousing of the mentally ill, was groundbreaking at the time, and even more striking was the philosophy employed there. Patient care focused on beauty, comfort, and dignity as outlined by Dr. Thomas Kirkbride. The asylum buildings and their surroundings were a central component of his concept of “moral treatment” known as the Kirkbride Plan. “Beauty as Therapy” was the mantra of the Northern Michigan Asylum for the Insane’s first Superintendent, Dr. James Decker Munson.

Architect Gordon W. Lloyd of Detroit designed the massive main building, referred to as Building 50, in the Victorian Italianate style with a central administrative core flanked by wings housing patient rooms.  The bilaterally symmetrical plan has a wide double-loaded corridor that steps back incrementally, allowing each patient room access to fresh air and sweeping views of the pastoral 300-plus acre site. Building 50 is over ¼ mile long and consists of over 350,000 square feet of space on two and three stories. The exterior of the masonry-bearing structure features a rusticated ashlar stone base with buff-colored local brick and sandstone details.  The façade features many varied gables, dormers, and window forms. Striking roof spires add interest but served a functional purpose to promote ventilation by drawing air through the building via a chimney-effect.  Sadly, the “Old Center” portion of the building, including the main entrance and focal tower-form was demolished in the 1960’s. The Old Center was replaced with a non-descript two story flat-roofed structure that bears no architectural connection to the original.  Additional wings, buildings and cottages were added over the years but most of Building 50 has remained intact.

The State of Michigan, who operated the hospital, made the decision to close the facility completely in 1989 as mental health treatment models moved to a decentralized, pharmaceutical-centered approach.  The other Michigan Kirkbride-principal facilities located in Pontiac, Kalamazoo, and Dearborn were also dispatched and ultimately the buildings were demolished.

The property was transferred to Grand Traverse Commons Redevelopment Corporation, a group with representatives from both Garfield Township and Traverse City.  The group struggled for several years to find a feasible path for redevelopment. In 2002 the current developer, The Minervini Group, stepped in and immediately pledged $1.5 million to repair and stabilize the roof of Building 50.  With walkable communities in mind, the group has invested over $120 million and created a vibrant mixed-use development including housing, retail shops, restaurants, and event spaces.  The Village represents one of the largest adaptive reuse redevelopment projects in the country and has become a popular destination.  In addition to Building 50, the campus also offers botanic gardens, hiking paths, parks, a school and a winery.