It’s all ‘Fore a Great Cause!” MAF recently held its annual golf fundraiser at Western Golf & Country Club in Redford. The event is a key source of investment for the $32,500 a year granted in MAF architecture student scholarships, as well as MAF’s K12 educational programs and Architecture Awareness Grants. 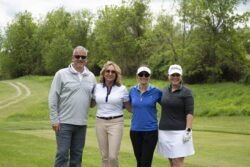 The event included a 9-hole scramble, putting contest, lunch, afterglow reception, and silent charity auction (which is the kickoff event for MAF’s annual Auction for Education). Top finishers qualified for a blind draw for prizes. This year’s event raised approximately $31,000.

“Highlights of this year’s event included outstanding sponsorship response, the social hour, hosting by Western Golf Club, and of course, overall attendance,” said Brandon Kinsey, MAF Fore a Great Cause golf committee co-chair (108 players registered for the event; 112 players constitute a sellout). “Year after year, the event’s success is truly based on fellowship and the camaraderie between attendees, even more so than playing golf. Also, participation by female golfers increased sharply this year, with women making up 25% of our 2022 participants.”

The opportunity to play golf with one of six honorary captains – each a construction industry leader such as project owners or owner’s representatives – was offered for purchase, and provided valuable one-on-one networking time.

“Once again, we had an extraordinary effort by our volunteers to help plan, organize, and orchestrate the event,” said Kevin Shultis, MAF Fore a Great Cause golf committee co-chair. “MAF’s golf committee is very appreciative of all who attended and sponsored this year’s event, and helped us exceed our fundraising goal. We kept the entry fee the same this year, despite the fact that club rental costs had increased significantly over last year. The event proceeds, even after factoring in rising costs, will greatly benefit MAF programming.”

In 2023, the event will return to the newly-renovated Plum Hollow Golf Club in Southfield. Every year, the golf outing is held on the Monday before Memorial Day (read the article about the Plum Hollow restoration in the Detroit Free Press).  https://www.freep.com/story/sports/golf/2022/07/20/plum-hollow-country-club-golf-course-restoration/10100544002/?gnt-cfr=1. Keep watching the MAF website, newsletters, and social media for registration and sponsorship opportunity updates for the 2023 event. 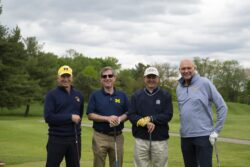 MAF would like to thank this year’s ‘Fore a Great Cause’ sponsors, volunteers, and committee members: