The Alden B. Dow Home and Studio is excited to present DOW BY DECADE, in-person tours of three outstanding examples of the work created by Alden B. Dow on Saturday, October 8th from 12-4 pm. The homes that are open for tour represent three decades of Dow’s distinguished 50-year architectural practice. They are a small sampling of the 130 structures that Dow designed in his hometown of Midland, Michigan. 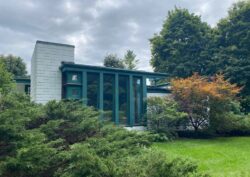 Throughout his career, Alden B. Dow designed over 600 structures. His buildings not only began the incredible Mid-Century Modern movement in Midland, with over 430 structures today, but his structures were the first of their type in other cities like Ann Arbor, Lansing, Saginaw, and Grosse Pointe forever influencing future designs and modern structures. His design work paved the path for other architects to add to the mid-century modern movement that was growing across our country. Because of this influence and the incredible body of work he created, Dow was named the Architect Laureate of the State of Michigan in 1983.

The houses that are on tour October 8th show both the continuity of this design philosophy as well as how he grew and changed over time, meeting the individual needs of his clients and our changing world. They will illustrate how he not only incorporated new and emerging materials and products but also created new products and processes that allowed him great flexibility in his design work.

Featured in DOW BY DECADE is the 1934 home of Helen and Alden Hanson. The Hanson home is also one of the earliest examples of Mr. Dow’s use of his newly designed and patented Unit Block System. The blocks are a rhomboid shape that allow for one row to be angled to the right and the next to the left, overlapping the joints which strengthen the whole wall. The blocks were made of the cinder coming from the
coal burning furnaces at Dow Chemical. Alden Dow’s father, Herbert Henry Dow, had used the same material, but in a different shape, to form the early bridges in the Dow Gardens. The block system has 16 variants that accommodate for right angles, corners as well as door and window openings. The Hanson house is an excellent example of the beauty of the block as seen in the highly functional, yet ornamental chimney design. The house accommodated the young Hanson family and had plans for expansion which happened quickly beginning in 1938. 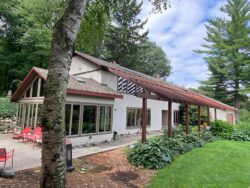 The Elizabeth and Shailer Bass Home represents Dow’s work in the early 1940s. Moving away from the Unit Block System, the house represents Dow’s flexibility in using different materials and accommodating the contour of the site. The Bass Home is built into a hillside that allows for access from the upper level of the two-story home to the wooded surroundings on the back side. The sloping shingled roof continues outward on the front of the home with an extended trellis that creates a wonderful screening for the entry and front exterior. Although Dow used trellises to extend structures into their natural environments, this trellis also creates privacy while becoming the predominant feature of the front of the home.

The Nan and Dr. Robert Blackhurst Home is an excellent example of Mr. Dow’s ability to create gracious, dynamic and engaging environments that are simultaneously expansive and intimate. The home was designed with the personal and professional entertainment of the 1950s in mind. Expansive floor-to-ceiling windows run the entire length of the public spaces of the home connecting it to the natural environment and full immersion into Valley Park. Smaller windows run the entire length of the bedroom wing which is raised a full story from the street level which insures privacy. Like all three of the structures on tour, incredible edge grain fir built-in cabinetry creates beauty and functionality that is unmatched.

Dow By Decade will be held on Saturday, October 8 th, from 12-4 pm. Advanced reservations are required. No sales on the day of the event. Docents will be positioned throughout the homes to give information and answer questions. For the safety of all, masks will be required while in the homes. No photography will be allowed.

In addition to the three homes designed by Alden B. Dow, the Alden B. Dow Home and Studio will offer Ultimate Home Tours of the Home and Studio. The tours will feature the rarely shared areas including the tunnel, roof, and terraces. These tours are offered at 10:00 am and 2:00pm and are $25 per person and can be purchased by going to www.abdow.org or by calling 989-839-2744.