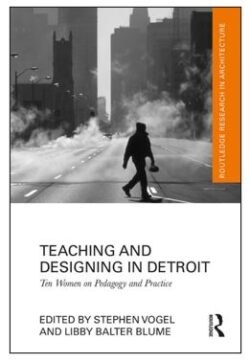 Along with its share of challenges typical of most post-industrial cities, Detroit also is rich with valuable assets, including the female design industry professionals who contribute positively to the city’s built environment and its social fabric.  This is the impetus behind the book Teaching and Designing in Detroit: Ten Women on Pedagogy and Practice, (Routledge, 2019, 2021). The book provides insights into Detroit, design, teaching, practice, research, and more from the point of view of several Detroit-based female architects, educators, artists, and designers.

Architect and Dean Emeritus of the University of Detroit Mercy (UDM) School of Architecture (now the School of Architecture and Community Development), Stephen (Steve) Vogel, FAIA, is co-editor of the book, along with Libby Balter Blume, Professor Emerita of Psychology and Architecture at UDM. “In many ways, the book is about pedagogy-how do you teach architecture in a city that is losing population and therefore not building buildings?,” said Steve. The book highlights a new “ecological urbanism” through the women’s work in art, architecture, design, installment, planning, landscape architecture, and community engagement. It also explores how the city’s issues have affected the women’s practice, student relationships, and design and community development perspectives.

Steve spent 18 years as Dean of the UDM School of Architecture (he is currently a distinguished professor of architecture at the school). As the only school of architecture inthe city, Steve determined that its mission was to focus on serving the people and neighborhoods of Detroit, and to educate future architects committed to building sustainable communities. He also co-founded the Detroit Collaborative Design Center, a UDM-based, center providing professional design services to non-profit civic and community organizations, and created UDM’s Master of Community Development program to educate graduates in multi-disciplinary approaches to bettering quality of life. Steve also co-founded Detroit-based architecture firm, Schervish Vogel Merz, PC. “At one point, my architectural firm was over 60% women because they often outperformed men,” Steve said.

What prompted the idea for the book? “When I became UDM Dean in 1993, there were no full-time women and few part-time women on the faculty. During my tenure, I hired more than a dozen female faculty members,” Steve said. “In a conversation with two of them – Janine Debanné, who now teaches at Ottawa’s Carleton University, and artist Christina Bechstein, who now has a studio in Maine – we ended up talking about the culture of the school while they both taught there. It dawned on me just how special the environment is, and that there should be a book about it.” 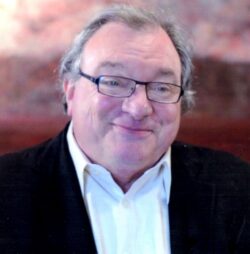 Other contributors to the book include Ronit Eisenbach, Karen Swanson, Claudia Bernasconi, Amy Green Deines, Allegra Pitera, Christina Heximer, Virginia Stanard, and Julie Ju-Youn Kim.  Each had been hired by Steve to teach at UDM, and/or be on the staff of the DCDC.  The book’s foreword is by Leslie Kanes Weisman (the only female architecture professor at UDM in the 1970s); its afterward is by Sharon Egretta Sutton, FAIA, a nationally known Black female architect who has written books about race and women in architecture.

Steve also authored the book Making Detroit: History and Mystery (Detroit Collaborative Design Center, 2019). “Growing up on a farm, I immediately fell in love with Detroit and its people,” he said.  “My entire professional and most of my personal life has been spent in the city and I wanted to pay homage to it with a book that summarizes the history of the city’s development. It is not strictly an architecture book but does talk about the cultural forces that shaped the city, caused its decline, and now its renewal.” He also is working on another book (with architect Robert Ziegelman, FAIA) which is tentatively titled Constructing the City: Prefabrication and Ecological Urbanism.

Steve points out that other post-industrial cities could benefit from insights of Teaching and Designing in Detroit’s contributors.  “As professionals who have been actively involved in Detroit, each of the women involved are committed to just environments, engaging residents, and creating vision for a sustainable future,” said Steve. “Architecture is about a lot more than the creation of a powerful form. It is about people and experience and improving the quality of life, and these women are bringing a sensitivity to the profession that has been sorely needed.”

“The mission to balance gender in the profession continues as strong as ever, and today, over 50% of the full-time faculty at UDM are women,” said Steve. “Very few schools of architecture can say the same, but the numbers are changing nationally. Most architecture student bodies are now more than half women.  It is slowly becoming a woman’s profession, and there have been recently several women as President of the American Institute of Architects. 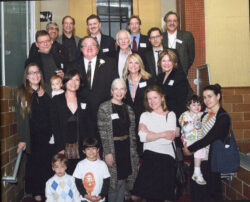 Steve adds, “To attract more women to architecture, you need to give women a voice, take gender out of the equation and make it about ability and passion and commitment. And be prepared to engage with women in the design of our buildings, our communities and our cities – they are the future of design.”

The School of Architecture and Community Development (SACD) will be celebrating the book with a free virtual lecture by Leslie Weisman and Sharon Sutton on Friday, October 29, 2021 at   5 PM as well as a question-and-answer session with the authors. Interested parties may also attend in person at the Exhibition Hall in SACD. MAF will share event registration information on its website, social media, and in the MAF October newsletter as it becomes available.

Images (top to bottom):  Teaching and Designing in Detroit is available in paperback, hardcover, and e-book editions; Steve Vogel; and a photo from Steve’s 2011 retirement as Dean of the UDM School of Architecture, showing six of the book’s contributors (along with male faculty and children of faculty members).  Book contributors (L to R)  shown are Janine Debanne, Julie Kim, Libby Blume (co-editor), Amy Deines, Allegra Pitera, and Claudia Bernasconi.