As the United States expanded, courthouse buildings were foundational for local communities.  Often, they were the first public buildings to be constructed, sometimes in remote locations with little else in the way of public infrastructure. In Michigan’s Upper Peninsula with its pristine forests and miles of natural shoreline, courthouse buildings serve as hubs of community and government. Keweenaw, Houghton, Iron, and Marquette Counties have interesting historic courthouse buildings that continue to exist as proud monuments and important civic spaces.

The Keweenaw County Courthouse is in Eagle River, Michigan.  It was designed and constructed by John Sweatt in 1866, a mere five years after the County was first established.  The simple rectilinear, clapboard-sided meetinghouse was built at a cost of $6,578.  The building was renovated in 1925, adding a pedimented front porch and Doric columns giving the building its current neo-classical appearance.  Sweatt also designed the Sherriff’s Residence and jail which is located on the same site.

The Houghton County Courthouse, dedicated in 1887 and built at a cost of $75,568, was also designed by Sweatt, although its appearance could not be more different. The building’s opulence reflects the region’s prosperity during the copper-boom period (the region produced up to 90% of the copper mined in the US). The asymmetrical structure features a four-story entrance tower and striking mansard roofs sheathed in copper.  The cream-colored brick provides contrast to the red-toned local stone utilized for trims and accents. 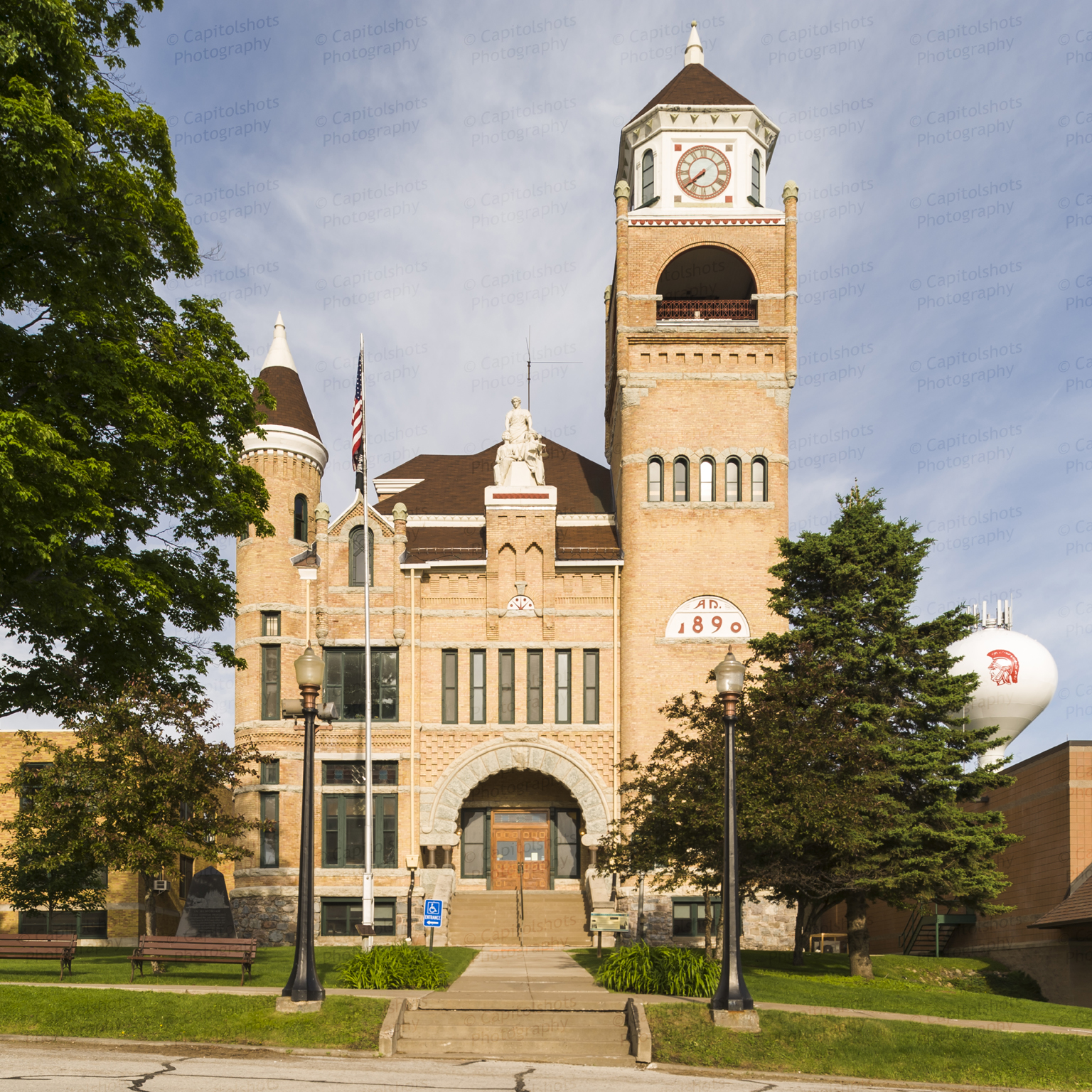 The Iron County Courthouse, located in Crystal Falls, Michigan, was built in 1890 at a cost of $40,000 and designed by architect JC Clancy.  The building has a castle-like appearance, typical of the Richardsonian Romanesque style.  The main façade features a deeply recessed entrance marked by a large hemispherical archway of regional stone supported by pairs of polished diorite columns which were quarried locally.   The entrance is flanked on either side by an engaged turret and an imposing clock tower that offers panoramic views of the area.

The Marquette County Courthouse, located in Marquette, Michigan, is an impressive classical building designed by local architects Demitrius F. Charlton and R. William Gilbert.  Construction was completed in 1904 at a cost of $210,000. Local sandstone is featured on the exterior of the building, with Portage Entry Redstone above the rusticated foundation of Marquette Raindrop Brownstone. A grand exterior stair ascends several feet above grade to the main floor, further enhancing the building’s hilltop prominence.  The three-story central mass features a Doric columned portico flanked by symmetrical wings. A steel frame supports a central dome that illuminates the striking stained-glass ceiling over the second-story courtroom.  Locally mined copper is featured on the dome’s roof as well as the building fascia and cornices.  Movie buffs might recognize the building as a location in the 1959 film Anatomy of a Murder.

The historic courthouses of the Upper Peninsula are impressive examples of civic architecture.  They continue to serve as reminders of the grit and determination of the people who established thriving industries and prosperous communities in the remote frontier of Michigan’s UP.