Building with the Natural Environment:
Alden B. Dow Home and Studio

Alden B. Dow left an indelible mark on architecture throughout his career, and one of the most striking examples of his work is his own home and studio located in Midland, Michigan.  Dow originally studied engineering with plans to join the family business, Dow Chemical.  After three years in the engineering program at the University of Michigan, Dow changed his major to architecture and went on to graduate with a degree in Architecture from Columbia University in 1931 (Dow also married that same year). Dow and his bride, Vada, spent the summer of 1933 in Spring Green Wisconsin, apprenticing under the renowned Frank Lloyd Wright at his Taliesin studio.  Upon returning to Midland, Dow immediately started designing his home and studio. 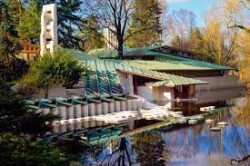 Construction began with the studio in 1934 and evolved over the next several years to incorporate an additional drafting room and the famous “floating conference room”, so noted due to its elevation 18 inches below the surface of the surrounding pond.  Construction of the adjoining home was completed in 1941. 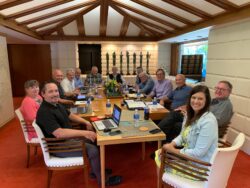 The Alden B Dow Home and Studio is a “must-see” in Mid-Michigan, along with the extraordinary 110-acre Dow Gardens. The impressive grounds and architecture exemplify Alden B. Dow’s belief that “…gardens never end and buildings never begin.”

Visit www.abdow.org to plan your visit.

MAF held its July Board of Directors meeting in the Alden Dow House’s Dining Room.