MSU Broad, also known as Eli and Edythe Broad Art Museum, is located on the campus of Michigan State University in East Lansing, Michigan.  The 46,000 square foot contemporary art museum opened in 2012, and was designed by the London based, Iraqi-born architect, Zaha Hadid. Hadid’s selection was the culmination of a design competition that included submissions from several premier architectural firms from all over the world.  Hadid died suddenly in 2016, making MSU’s Broad museum one of her final commissions. 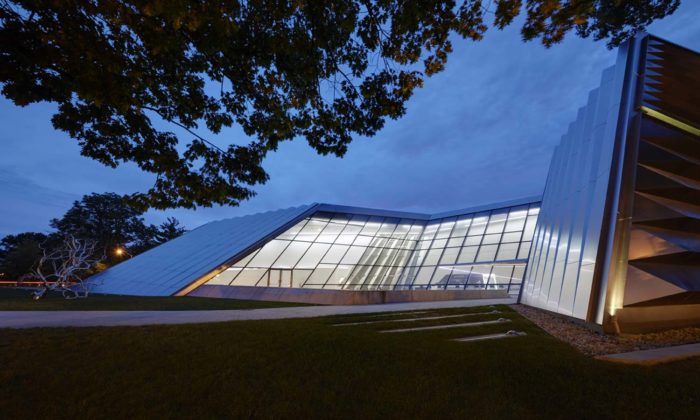 Located at the edge of the MSU campus, The Broad stands out in striking contrast to the traditional brick academic buildings nearby.  A pleated stainless-steel skin on the building’s exterior compounds the angularity of the structure, which boasts almost no 90-degree corners.  Hadid used the study of vehicle and pedestrian circulation paths, visual connections, and linear links to the surrounding landscape to influence the building’s form. Line, direction, and movement are also represented in the building’s interior. A central monumental stair transects the building primary axis and becomes a central knuckle, connecting the various exhibition spaces in the building. The interior finishes are stark in comparison to the glistening, machine-like exterior, allowing the artwork and exhibits to dominate the spaces.

The building also houses functions relating to academia, research, and conservancy, as well as reserving over 75% of the overall square footage to exhibit space.

The Broad is a striking example of world-class contemporary architecture in an otherwise sleepy college town. The uniqueness of the Broad’s design attracts both admirers and critics, and much like the art within, encourages study and reflection. The museum is open to the public and except for special events admission is free of charge (visit the museum’s website for hours and other information).

See additional photos of the Broad Museum and other Must-See Michigan Architecture on the MAF website.